Easy authentic German recipes? German food isn't normally put into the category of being quick and easy to make.

That, however, is about to change! You'll find Oma's German recipes are actually easy to make. And ... so yummy!

Many of the German traditional cooking and baking recipes require many hours and ingredients not commonly found outside of Germany.

That's where this Oma needed to make changes. Cooking and baking for now over 65 years (starting at my Mutti's side), I applied what I learned to be able to make favorite family dishes easily. No fancy methods, ingredients or equipment.

Just delicious German food ... outside of Germany. In fact, these Top 10 German foods can be enjoyed worldwide! 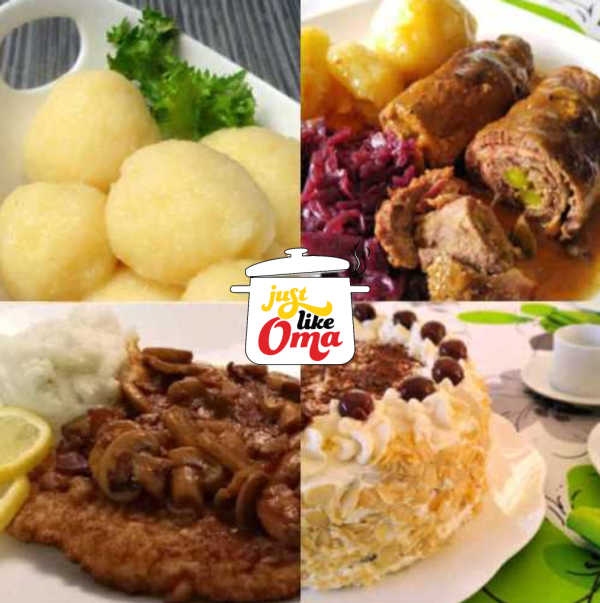 Take a look at my quick hack for making a dish that tastes just like beef Rouladen. I created a recipe I call Flatladen. It's a simplified version of Rouladen, but with the same great tasting gravy and tender meat.

Talk about easy and cheaper! Flatladen, aka "Flat Rouladen" , have become a favorite meal for all who have tried it. 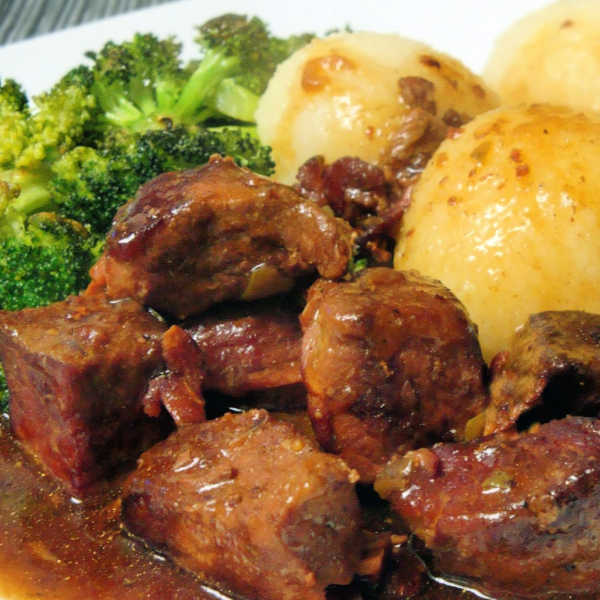 Food that is both easy

AND quick to make

AND so traditionally German! 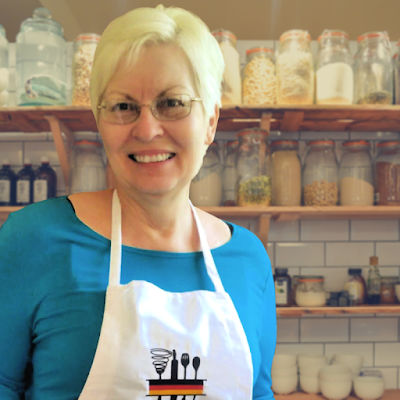 That's me, Oma. And, only you'll know my secrets and hacks to preparing these dishes to resemble the old "tried and true" traditional methods with more modern ones.

For example, take my German Apple Strudel recipe. This one is one of my most often made dessert recipes, whether for guests or just hubby and me. 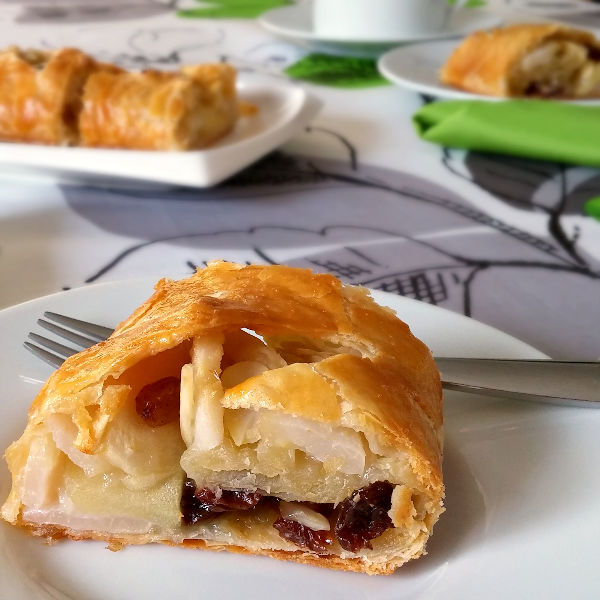 The original method is quite a process and has quite a learning curve. The dough is stretched to paper-thinness, the size of a table-top!

Now there's an easy way to make this. And, you can even make the vegan version, if you need that for guests.

In fact, this strudel is one of the quickest and easiest desserts there is! Perhaps you're looking to make a German Black Forest cake? You can choose to make the traditional way made from scratch. But, if you're in a hurry, there's an easy version made from a mix and a can! 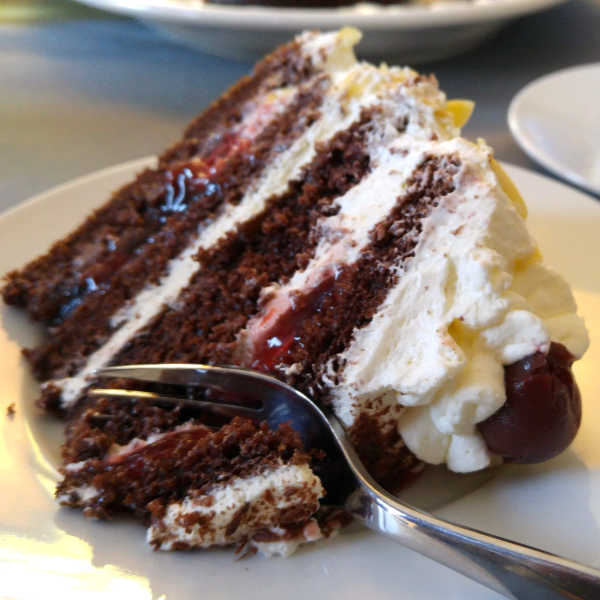 Traditional German food ~ quickly and easily. Ready? Which will you start with?

What are traditional German Foods?

Each region of Germany has its own favorite foods. However, the top 10 traditional German foods are:

Here are some of the most requested and favorite ones, ones that are so delicious and not that difficult to make: 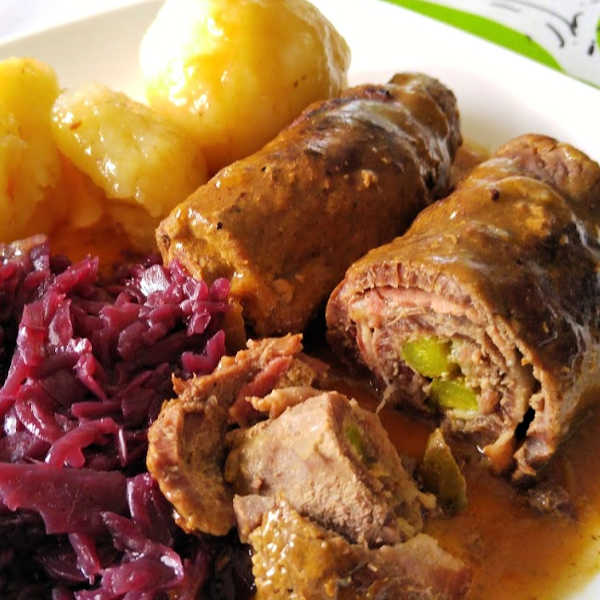 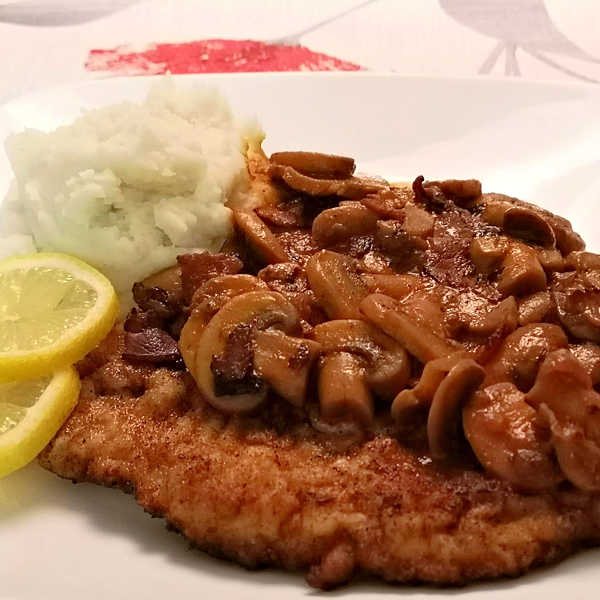 What is the national dish of Germany?

This is an oft asked question, but is so really difficult to answer. Simply stated, with Germany being made up of a mix of cultures and regions, there really isn't just one national dish. Most regions have their own favorites, but among the very top ones are sauerbraten and rouladen.

However, there is one dish (according to a recent German poll) that is often considered the national dish ... Königsberger Klopse. 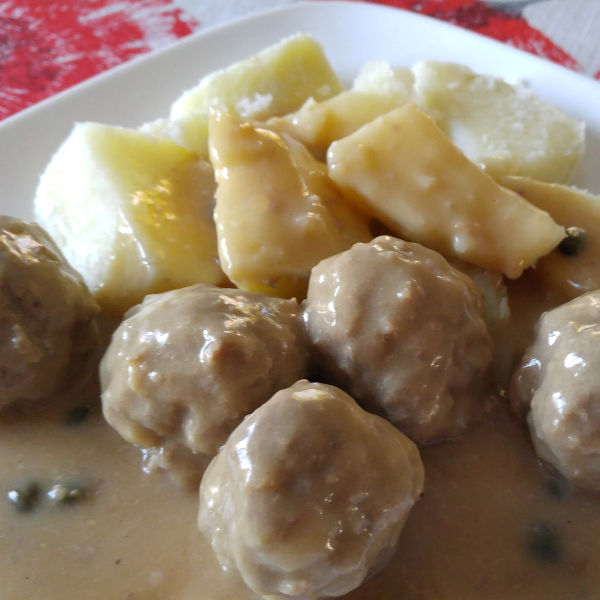 What are some traditional German Desserts?

After all that good food, it's time for desserts, cakes, and tortes! There are so many to choose from. The most popular? Here they the top 7 German desserts: 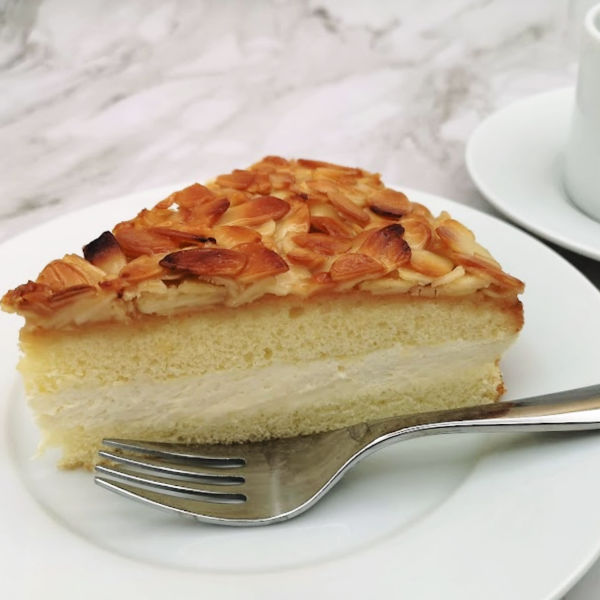 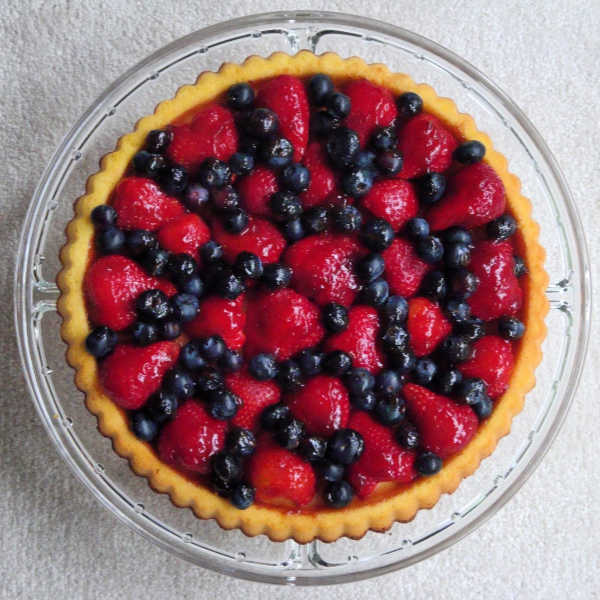 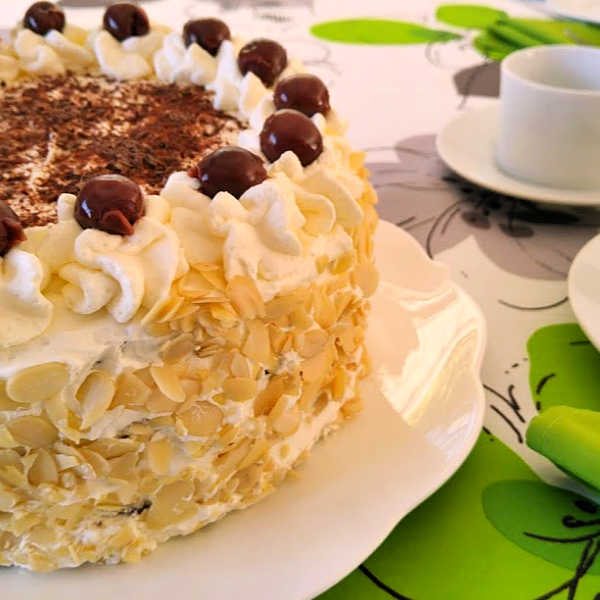 What foods are traditionally eaten at Oktoberfest?

Then, of course, there's Oktoberfest. The foods traditionally eaten there include schweinshaxe (pork hocks) and brathendl (roast chicken), so these could well be classified as national dishes as well.

Then, of course, there's the pretzel, known as brezel. We'll call it a national treat, whether served sweet or savory.

So go ahead! Get out YOUR pots and pans.

Pull out your ingredients. Print off some recipes, and get ready to start cooking and enjoying easy, delicious German foods today!

I've added 100's of my recipes here, and am adding more and more.

Check out my recipe index or, if you know what you're looking for, type it in the search bar in the top corner of this page. 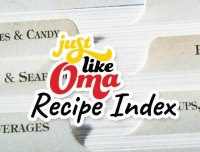 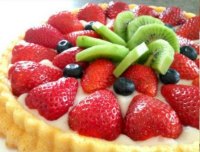 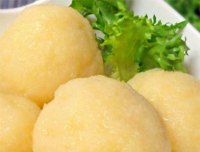 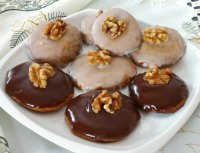 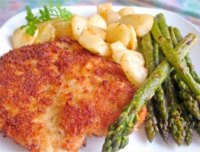 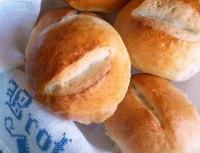 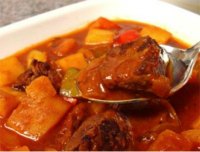 What Oma's fans are saying ...

These delicious soups are truly made in no time at all, quick, as the title says, with ingredients that you most likely have on hand.

What a relief it is not having to go shop for ingredients you don’t know how to pronounce! Included in the book are many ideas of substituting the original ingredients and turning-up the taste a notch or totally changing the taste of the soup.

The directions are easy to follow and easy to understand. You’ll have no problem serving these soups to your guests. They are foolproof & yummy delicious!

Gerhild makes it so easy! She takes away the fear of messing up or trying something new.

‘Quick Fix Soups’ is a great addition to my recipe collection, one I don’t want to miss. Thank you, Gerhild, for inspiring us all and saving us time in the kitchen!

What Oma's fans are saying about her paperback book, "German Meals at Oma's" ...

Oma dispelled, with great skill, my stereotypical view of beige-y sauce over beige-y sausage with beige-y sauerkraut and beige-y potatoes and finally – beige-y taste. I thought all German cuisine was the same – sausage. Boy was I wrong. Beautifully photographed, Oma’s recipes taste as scrumptious as they look.

Here are my two sweet granddaughters, Lydia (on the left) and Alana, showing off Oma's unique German aprons and my newest cookbook. 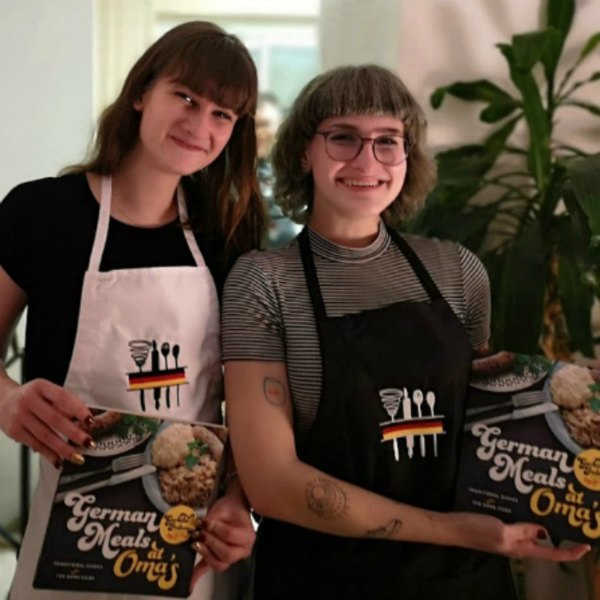 These two have been so much fun to cook and bake with ever since they were little. We're looking forward to many more yummy kitchen adventures together making German food!

In fact, Lydia has come on staff here at Just like Oma. She loves, not only to cook and bake, but also handles much of that techy stuff that happens behind the scenes. Check out her About Lydia page and see what she says.

PIN to SAVE this site to your Pinterest board! 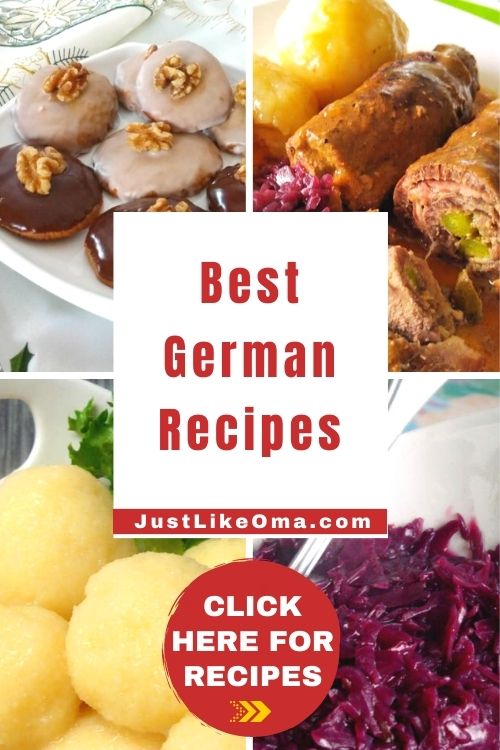 "For the Kingdom of God is not a matter of what we eat or drink, but of living a life of goodness and peace and joy in the Holy Spirit."

Quick-German-recipes.com does not sell any personal information