Looking for a German bread rolls recipe that's reminiscent of the Brötchen you had in Germany?

Take a look at these tasty German bread rolls. They are so similar to Oma's!

Depending which part of Germany you are from, these are known by various names... Brötchen (a diminutive of Brot meaning bread), Semmel, Schrippe, Rundstück, or Weck, Weckle, Weckli, or Wecken.

However, they are all known for being WUNDERBAR!

If there's one German food that's missed by almost everyone who has been in Germany and the one recipe that's always requested, it's this Brotchen recipe. 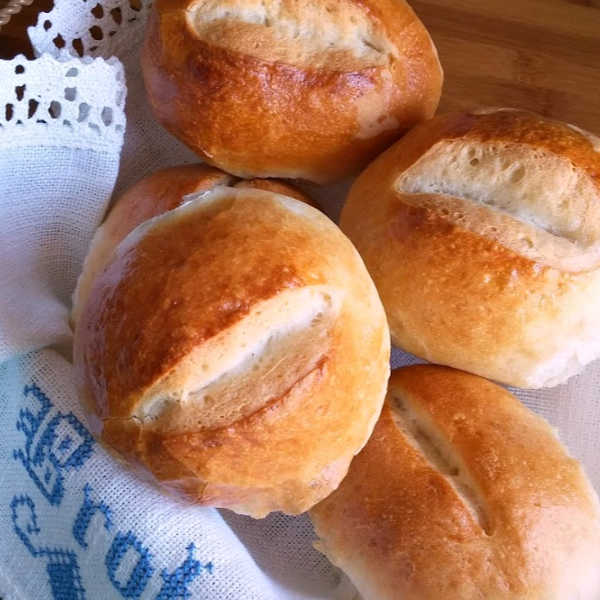 And, I've made it really easy by using my bread maker. Just 15 minutes prep time and ready in 3 hours. WUNDERBAR! Do check the IMPORTANT notices below before you start the recipe!!!

(Don't have a bread machine? Don't despair. You can use your electric mixer instead. Check out the recipe card below … I'll let you know what to do.)

Check the consistency of the dough after the first few minutes after the bread machine has mixed everything together and has started kneading it.

Depending on the consistency, one may need to add more flour, a tablespoon at a time, until the dough no longer sticks to the sides.

The amount of flour depends on things like the brand, humidity, altitude, etc. Whenever I use the bread machine for any baking or dough-making, I always check every time. Sometimes extra is needed. Other times not.

Once the dough has risen, make sure your work surface is floured. If you've made artisan bread, you'll almost recognize the consistency of this rolls dough is similar. It's a very, very soft dough... it almost flows!

In order to make it into rolls, you'll need to keep extra flour handy. You do want to be gentle with the dough. Fold it over gently several times. Gently pull it into a long roll and divide dough into 12 equal pieces.

Now, on a floured counter, gently form each section into a ball - the typical bread roll shape. You'll need to keep your hands floured. Only add as little flour as you can to keep the ball from sticking.

To get a smooth dough, place a ball of dough into one hand. With the other, pull the outside edge and pinch into the middle. It's also possible to do it directly on the counter.

This takes a bit of practice, but, my, my. It is worth it! 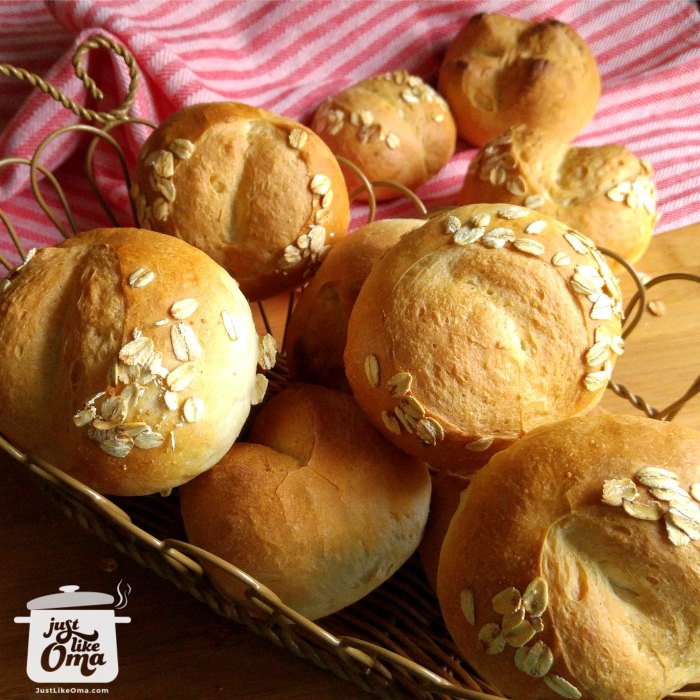 Are these German rolls identical to the ones you can get in Germany?

No, they are not identical. But they are great alternatives that taste so similar to us that we're happy.

Why are they different?

Part of the problem is that it is difficult to get the same kind of flour as is available in Germany. Then, in Germany, they often use fresh yeast. Something that is almost impossible to find elsewhere.

The other part of the problem is that making real German Brötchen is very time consuming.

So, is it possible to make real Brötchen outside of Germany? Yes, with the right ingredients and time. However, for me, I wanted something that is so similar to what we had in Germany that is also practical to make at home. And quick. And wunderbar. And, this recipe is it.

Really! That's why this deliciously simple bread rolls recipe is part of my quick and easy German recipes.

They really are that good! REALLY!

These have become hubby's favorite small crusty roll. He especially loves them with butter and jam for dessert!

If we're wanting a bit more 'crunch,' I make my Artisan Bread, that's so yummy too! And, actually, making that loaf of bread is even easier to make than this bread rolls recipe. 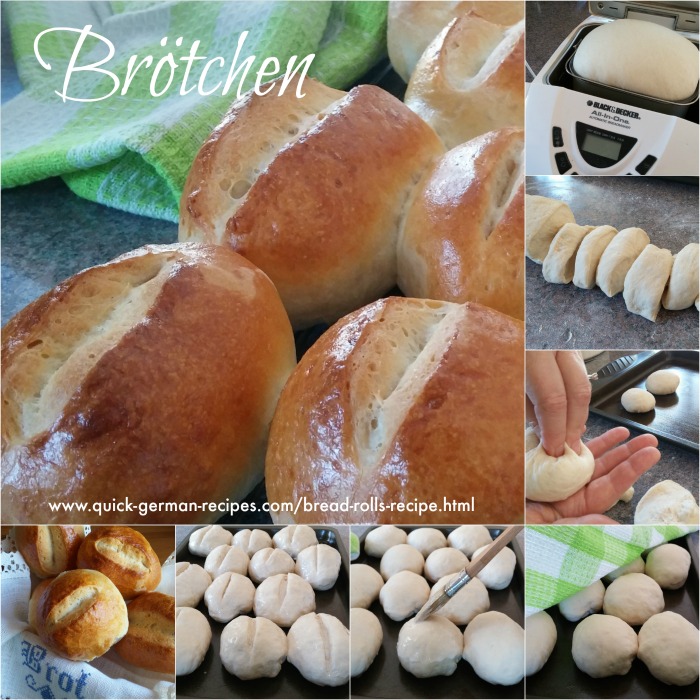 What to do with leftover Brotchen?

These German buns taste best fresh the same day they are made.

If you recall the ones you had in Germany, they didn't keep well till the next day. In fact later the same day, they no longer had that nice crisp crust. That's why fresh Brötchen were always bought every morning for breakfast!

However, if you have leftovers, you can spray them lightly with water and place in a 425°F oven for a few minutes and the crust will be crispy again.

Or, you can freeze them and then, once thawed, spray lightly with water and place in a 425°F oven for a few minutes as well.

That way, you can enjoy these even if they were not baked the same day. :)

Or, you can always make Bread Dumplings!

Ready to make these German Brotchen?

This simple Brötchen recipe (Brötchen is the German word for little bread) is very reminiscent of the German bread rolls from Germany. It’s claimed that there are over a thousand different varieties of these little German breads throughout the different regions of Germany. They are all known for being WUNDERBAR!

The one I’m featuring here has an incredible crust, yet is moist and chewy inside. Since I like easy, I use my bread maker to make quick work of preparing the dough, but you can also prepare the dough using the spiral dough hooks of your electric mixer (See NOTES/HINTS below). The secret for the crispy crust? Egg whites and ice cubes!

For the egg wash:

Notes/Hints for Making Without Bread Machine: 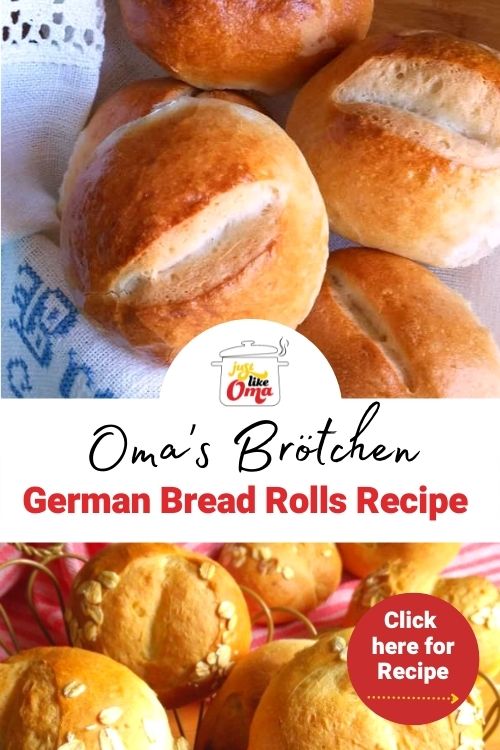 "The wise don't make a show of their knowledge, but fools broadcast their foolishness."