Oma's German French toast is a traditional Arme Ritter recipe that will remind you of sitting around Oma's table. She would make these as a delicious way to use up stale bread and often serve them with cinnamon-sugar sprinkled over the top.

That's one thing Omas are famous for. Never wasting anything, in this case, stale bread.

Below, I've drizzled maple syrup on top and served this with fresh raspberries. Lecker lecker!

Of course, since this tastes to good, I'll make sure I have stale bread around, just in order to make this. There are times hubby asks for pancakes and when I offer to make him this instead, his eyes light up.

For me, I actually find this easier and quicker that making those pancakes. Not that they take much more work, but I think this is easier. And, of course, this Oma likes easy!

French toast is literally sliced bread, soaked in a mixture of eggs and milk, and then pan fried.

Arme Ritter is literally sliced bread, soaked in a mixture of eggs and milk, and then pan fried. Yes, the same. But, there are often slight differences.

Of course, in France it's actually not called French Toast but Pain Perdu  which means lost toast.

Interestingly, researching the history of this dish takes one all the way back to 1st century A.D. in Ancient Rome by a gourmet named Apicus. The history of original recipe appears to be:

It sure sounds so similar to what we still make today, but it does mean it's neither French or German.

Arme Ritter was originally considered Arme-Leute-Essen, meaning poor people's food. However, it has found a resurgence in Germany and is now served even in the best restaurants.

Being German, of course these are fried in Butterschmalz, which is clarified butter. In some regions the egg/milk soaked bread is also coated with breadcrumbs before frying.

The resulting delicacy should be crispy on the outside and custardy on the inside.

Arme Ritter can also be served savory, rather than sweet. Salt, pepper and nutmeg are added to the milk/egg mixture. Coat with either breadcrumbs, ground sunflower seeds, or ground almonds. Fry as normal and then cover with a slice of salami or ham topped with cheese. Cover pan and heat until cheese melts. YUM!

Use your imagination for other savory additions. I'm thinking that adding a slice of tomato, a sprinkling of herbs, or adding some leftover schnitzel would be amazing.

The best bread to use for French toast is Brioche, French Baguette, or Challah. However, almost any bread will work, but the final texture may not be 'perfect'.

And, perfection isn't always necessary! What is important is that the bread is somewhat stale in order for it to soak up the egg/milk mixture.

Rarely do I have Brioche, French Baguette, or Challah lying around the kitchen. I'll even use some leftover homemade artisan bread (YUM), Ciabatta, or some even some sliced rolls. The result? YUMMY!

How to make Cinnamon Sugar

Our traditional topping for Arme Ritter was a sprinkling of cinnamon sugar. This easy breezy topping is perfect for pancakes and rice pudding as well.

Using a ration of 1 to 4 will give you that perfect level of spiciness with its distinctive cinnamon flavor but not too overwhelming. Adjust it according to your tastes.

Oma's German French toast is a traditional Arme Ritter recipe that will remind you of sitting around Oma's table. She would make these as a delicious way to use up stale bread and often serve them with cinnamon-sugar sprinkled over the top. 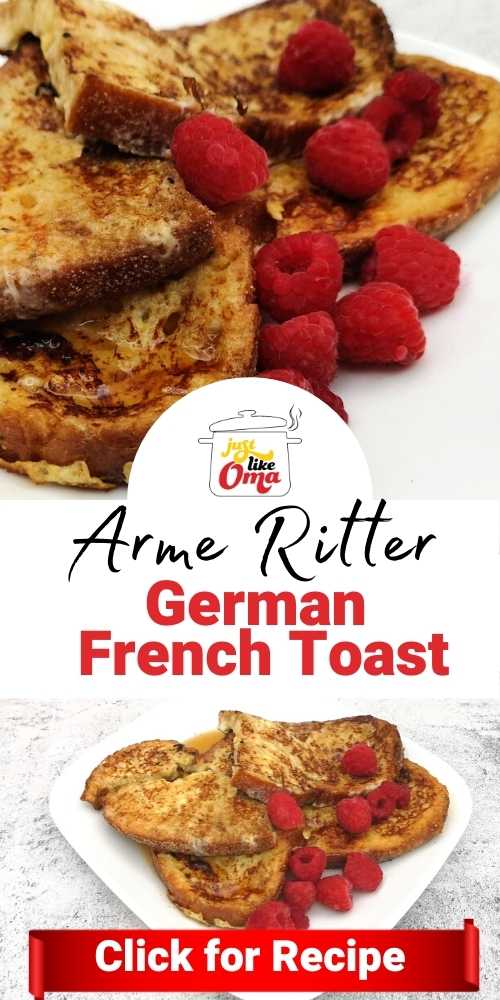 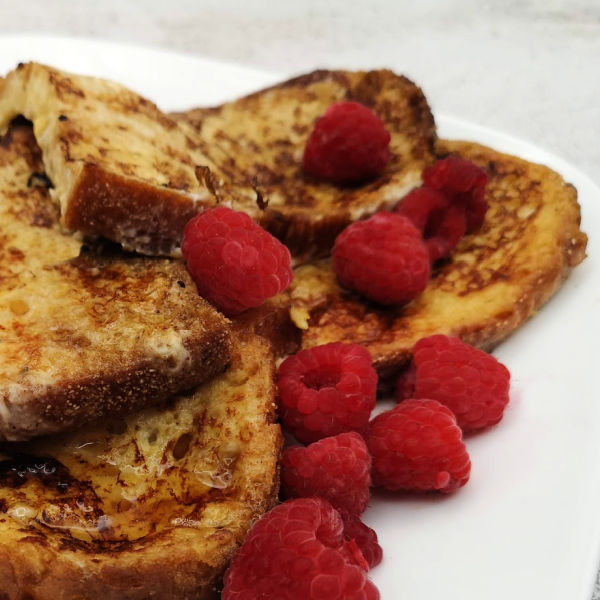 Oma's German French toast is a traditional Arme Ritter recipe that will remind you of sitting around Oma's table. She would make these as a delicious way to use up stale bread.

"There are "friends" who destroy each other, but a real friend sticks closer than a brother."