This easy German Spaetzle recipe, aka German egg noodles, makes a great side dish alongside many traditional German recipes: Sauerbraten, Rouladen, Goulash, and Schnitzel, to name a few.

This easy homemade Spaetzle recipe lets you enjoy Spätzle (occasionally referred to as German dumplings, even though it is a term more commonly used for potato dumplings) wherever you are in the world even if you don't have access to a German deli.

You may even want to make an extra batch of these tiny dumplings; they taste even better the next day reheated in some melted butter.

So, go ahead. Make this authentic German Spaetzle! This delicious side dish is German food at its best!

In modern German cookbooks and magazines, whenever recipes call for Spätzle (or Schwabian noodles), they are usually cooked from a package - a convenience food.

However, Spätzle aren't always available to buy pre-made in my part of Canada.

So, if I want to enjoy them, I need to make them from scratch. You can, too!

Pictured here are Käsespätzle I made using the German Spaetzle dumplings recipe below. I guess this delicious recipe could be called a totally upscale version of the American macaroni and cheese. Kids love it. And why not? It is so good, so rich, so YUMMY!

Whenever we had noodles of any kind when I was growing up, I always thought we were eating Italian-style.

I didn't know that the Swabia region of Southern Germany has its own traditional noodle dishes that aren't Italian at all. One of my favorites now being Schupfnudeln.

You may have noticed the different spelling variations for these delicious little German egg noodle dumplings. In German, they are called Spätzle, which is spelled with the German Umlaut (ä) which does not exist in English.

When words with Umlauts are anglicized, the Umlaut is replaced with an e, and so the anglicized version of Spätzle is spelled Spaetzle.

Since the ae combo looks a bit awkward, some people just drop the e and that's why you'll sometimes see it spelled Spatzle.

Is Spätzle similar to Gnocchi?

Yes, there are similarities between Spaetzle and gnocchi since they do taste similar and can act as great substitutes for each other. However, there are a few differences as well.

Spätzle are made smaller, and are more of a squiggly shape, while gnocchi tends to be more circular and pocket-like, almost resembling mini ravioli.

Gnocchi is also made with potatoes, and the German way of making Spätzle does not include potato in its recipe. It would often be served in a meal that has some other side that would have potato incorporated.

For example, your plate can have Spätzle, goulash, and mashed potatoes! Or classic potato dumplings, though some even use Spaetzle to substitute dumplings, seeing as their textures and taste are quite similar.

When making gnocchi, it can be fairly time consuming, while homemade Spätzle is meant to be a quick side dish to whip up fast. Kind of like your "emergency food" that you can make in a flash when unexpected company drops in.

Below is the stainless steel Lid and Scraper combo that I brought back from Germany on one of my recent trips there. It works great and has made the Spätzle-making process a lot easier than using the traditional method to make these small dumplings by scraping the dough off a wooden board with a long knife… just like Oma used to do!

The easiest way to make Spätzle is with a Spaetzle maker, such as a Spaetzle press.

If you plan on making Spaetzle often, it might be worth the investment.

However, there are different ways to make these delicious tiny dumplings using standard kitchen equipment.

You can use a potato ricer or food mill, or simply use a rubber spatula or wooden spoon to push the Spätzle dough through the large holes of a colander or cheese grater. 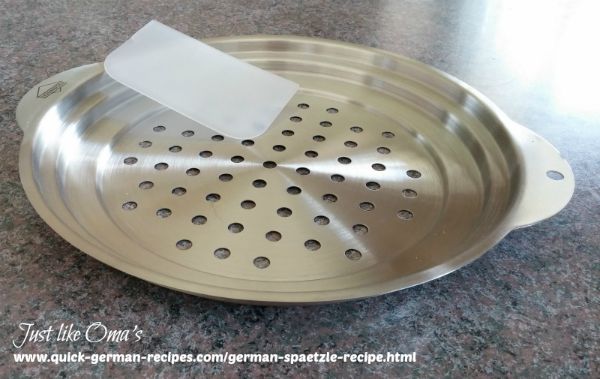 I have so many wunderbar memories in the kitchen with my Oma, and have had MANY of her most popular and traditional recipes, like this lecker German Spaetzle recipe!

My favorite way to serve these fun little noodles is with red cabbage! They complement each other so well, especially when the Spätzle starts to soak up the juice from the cabbage… oh-so delicious.

I've made Spätzle with Oma a couple of times and I remember how tough it was the first time making it. Let's just say I had never seen a Spätzle press before, and I definitely underestimated the muscle it takes to push the dough through the tiny holes! It's hard work! It was tricky at first but after making it again and a

How to make my homemade German Spaetzle recipe

In a large bowl, mix all-purpose flour with a little bit of salt using a wooden spoon.

Mix eggs into flour mixture until well combined. (You can certainly use an electric mixer, if you prefer.)

Add just enough water (or milk) to make a nice smooth, light, and firm Spaetzle dough. You don't want to add too much water, so the best way is to start with just a little bit and work your way up as needed.

Once it has reached the right consistency, let the dough rest for 10 minutes.

In the meantime, bring a big pot of salted water to a boil over high heat.

Using a Spaetzle maker, push dough through directly into the pot of boiling water. If you don't have a Spätzle maker, please see above for other options.

The tiny noodles will float to the top of the water once they are done. Remove with a slotted spoon to a colander to drain excess water.

If you are making your Spaetzle ahead of time, stir in a little butter to keep them from sticking together and store in an airtight container. They'll keep in the fridge for a few days. They also freeze really well.

To reheat, melt some butter in a large skillet or frying pan and add the cooked Spaetzle (or frozen Spaetzle) to heat through. This will crisp them up a little and add a buttery flavor. Yum!!

How to serve Spätzle

They are often served with deep-fried onions and bacon, but they are also delicious served with sauces and gravies, like this Jägerschnitzelsosse, a traditional German sauce with a heavenly combination of bacon and mushrooms.

Or try using this versatile little dumpling instead of regular pasta in your favorite noodle soup.

Another fabulous way to serve these is to turn them into Cheese Spaetzle.

This easy German Spaetzle recipe is the perfect side dish for many German meals. Try serving it with pork chops and red cabbage for utter deliciousness. 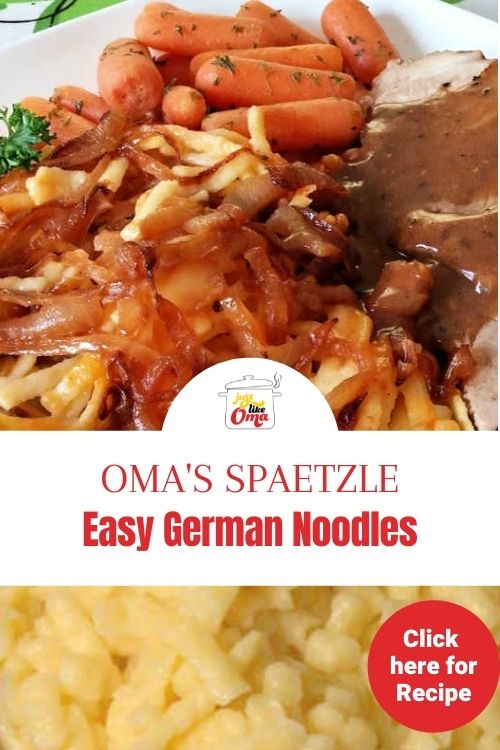 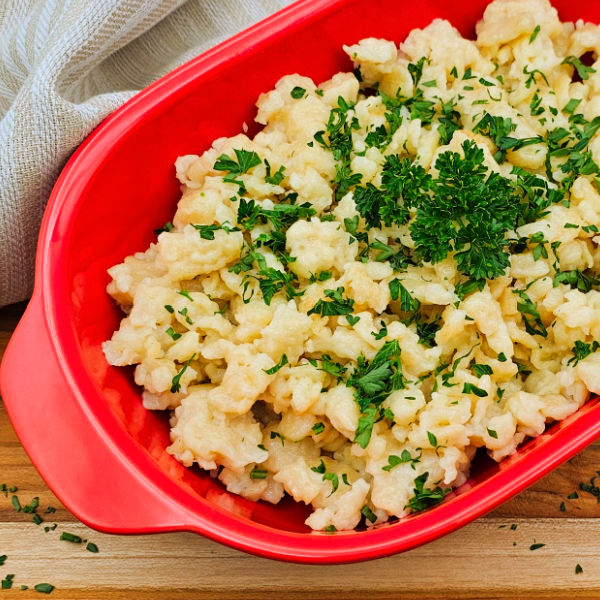 A German Spätzle recipe can be tricky to make. Here's Oma's easy version of this traditional favorite German egg noodle. Delicious when paired with caramelized onions!