Here's the sauerbraten recipe, a traditional German pot roast, that comes from my Mutti's own handwritten cookbook. Her recipes are special to me, full of wonderful memories, especially sitting around the dinner table enjoying these delicious feasts.

This amazing tender beef dinner is one of those. The slow cooking makes this marinated beef ever more tender. It's a traditional German meat, a favorite at home and restaurants alike. It's German food at its best!

Best of all, it's so easy to make and not a lot of work. It's one of those easy slow cooker recipes that one loves. But, you can do it on the stove top or in the oven if you wish.

A traditional sauerbraten is easy to make, but it's NOT quick ... it takes a fairly long time to marinate and to cook. It just means that you need to do some planning to allow several days for the marinating to take place.

But, it's SO good and SO worth the time.

What cut of meat is used for Sauerbraten?

Usually beef, such as a boneless beef chuck roast, a rump roast, or a top round roast is used for sauerbraten. Originally, horse meat was used, but that isn't common now-a days. However, a pork roast, venison, or lamb are sometimes used for this marinated german-style pot roast.

How long should you marinate the beef roast?

For most cooking, marinating normally takes from two hours to two days. For German Sauerbraten, that's not long enough!

The traditional marinating time is anywhere from three to five days. During this time, all you need to do is daily turn the meat once or twice in the marinade. The results are worth the time.

Why do some recipes add gingersnaps?

In southern Germany, Sauerbraten is accompanied with a gingersnap gravy. Well actually, in Germany Lebkuchen cookies are used. Yes, it's the same kind of cookie that's enjoyed at Christmas.

In fact, one can buy Lebkuchen especially made for this purpose. Over in America, the easy substitute for this are gingersnap cookies. They both thicken and flavor the gravy. Some American recipes actually add brown sugar as well (???).

However, in northern Germany, Lebkuchen is seldom used. Just seasonings and cornstarch or all-purpose flour. Nothing sweet at all. It's actually the way my Mutti used to make it and is so good. It's my favorite way as well.

Are there different ways to cook Sauerbraten?

In Germany, my Mutti used to cook it on the stove top. Once she came to Canada, she converted her authentic German sauerbraten recipe to a slow cooker Sauerbraten just like she did with many of her pot roast recipes. She really LOVED her slow cooker!

Other methods to cook it are in a pressure cooker or the oven. Both are very common methods in Germany.

Personally, I like using my crockpot since it's something I can leave on the counter and go shopping.

One still needs to brown the meat first in order to build the flavor. Then place meat, vegetables, and broth in the crockpot. Set it and forget it until it's time to make the gravy,

But what if you've got a craving for Sauerbraten. It's already 4 o'clock and you don't have any marinated meat? Follow my recipe for making this in an Instant Pot pressure cooker and you'll have a complete meal on the table by supper.

Here, I'm just about to seal the Instant Pot pressure cooker and have dinner ready in only one hour. Wunderbar! 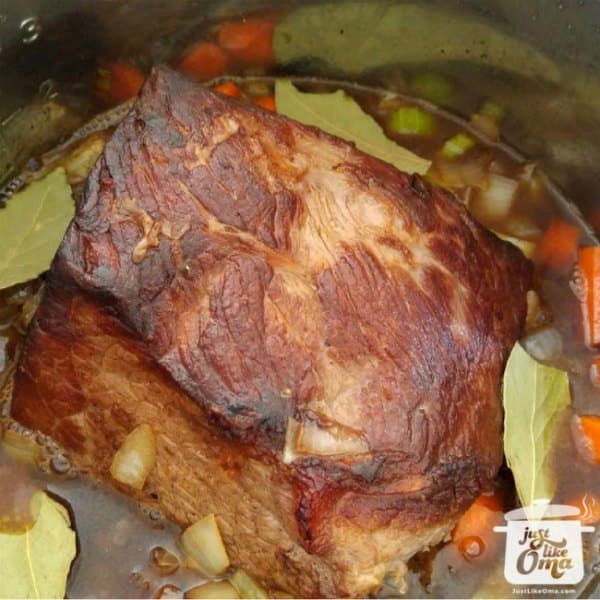 It won't be identical to a marinated roast, but if you've got a sauerbraten craving and want it for dinner tonight, it'll be the pressure cooker method. WUNDERBAR!

How to make Sauerbraten the traditional way

The first step is to marinate the beef in a vinegar mixture. To do this, I use a Ziploc bag which makes turning the meat daily an easy task. I place that into a bowl or, as shown here, in a super large measuring cup. Why? Just in case the bag breaks!

If you wish, you can use a ceramic or glass bowl. 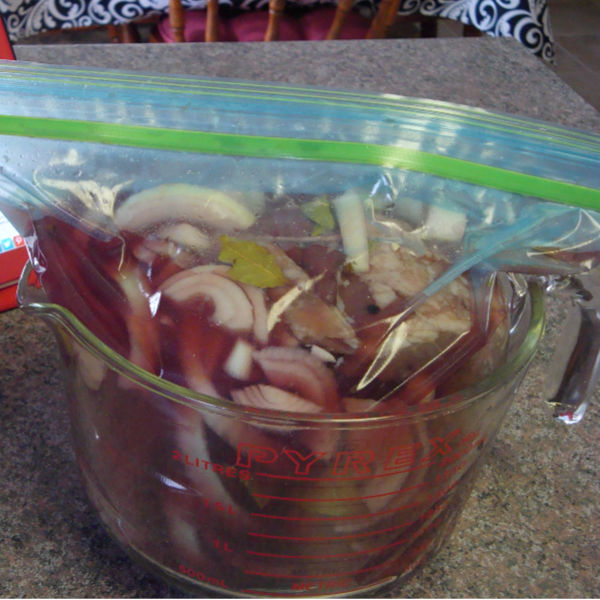 Now put the whole thing into the fridge and turn the meat, once or twice daily. Plan on doing this for 3 to 5 days for the best flavor.

Then, it's time to get a nice sear on the meat. This seals in the juices and builds flavor, not only for the meat, but for the gravy, as well.

Drain the meat, keeping the marinade. In a large saucepan, brown the meat in fat (bacon fat really is the best) on all sides. 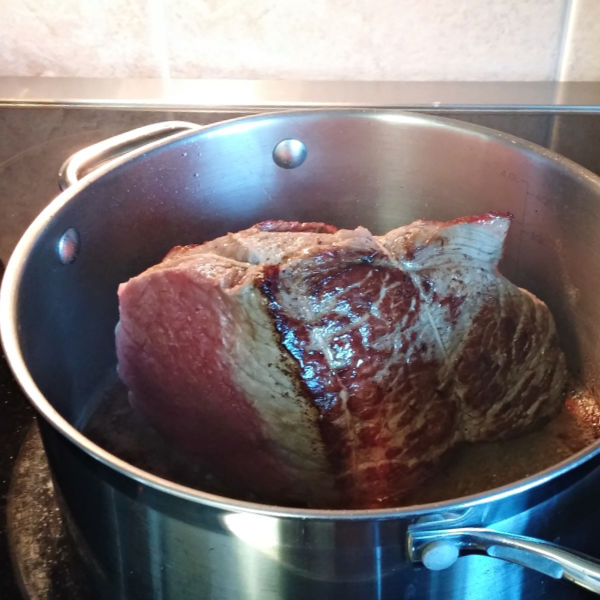 Add the carrots, onions, and celery. Brown these a bit as well.

Now, you get to choose how you want to actually cook the meat. Either, add the liquid (some marinade and some beef stock or broth) to the saucepan, cover, and simmer for about 3 hours on the stove top or into the oven at 350° for 2 to 3 hours.

Or put the meat and the rest of the contents of the saucepan, including those wonderful brown bits from the bottom into the slow cooker. Add the liquid. Cover and set for 7 to 8 hours on low. This is my favorite way and the one I learned from my Mutti.

Then it's time to make the gravy (with or without gingersnaps) and slice roast, ready to serve. 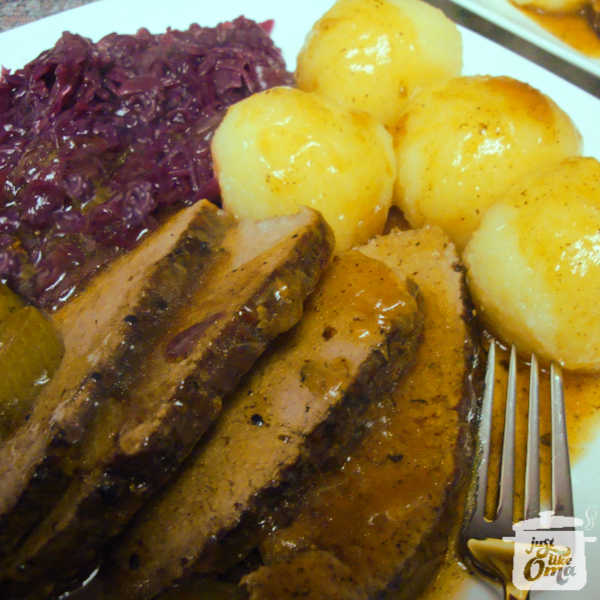 What to serve with Sauerbraten?

Here's the sauerbraten recipe that comes from my Mutti's own handwritten cookbook. Her recipes are special to me, full of wonderful memories, especially sitting around the dinner table enjoying these delicious feasts.

This amazing tender beef dinner is one of those and is often served with red cabbage and potato dumplings. Choose according to your taste buds to make the southern version with gingersnaps or my favorite, the northern one without. 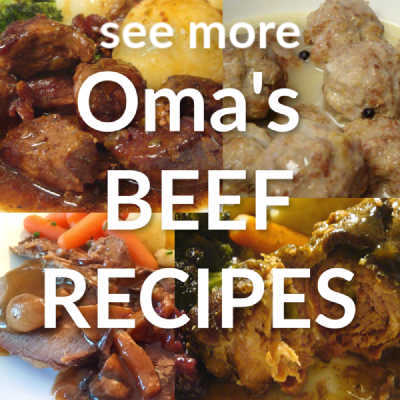 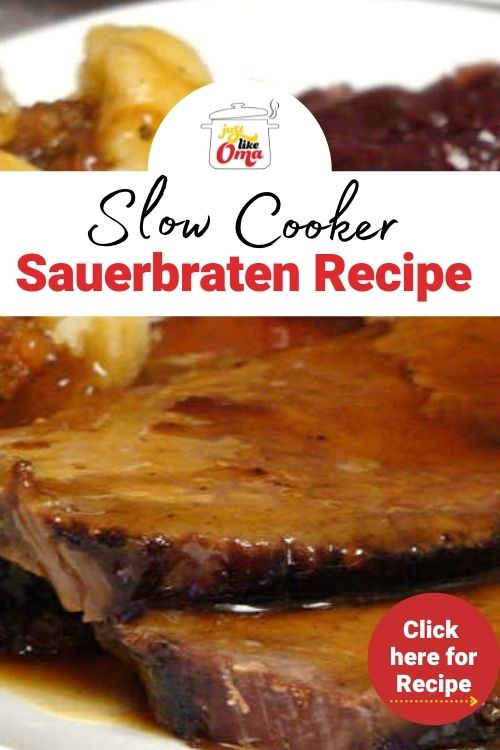 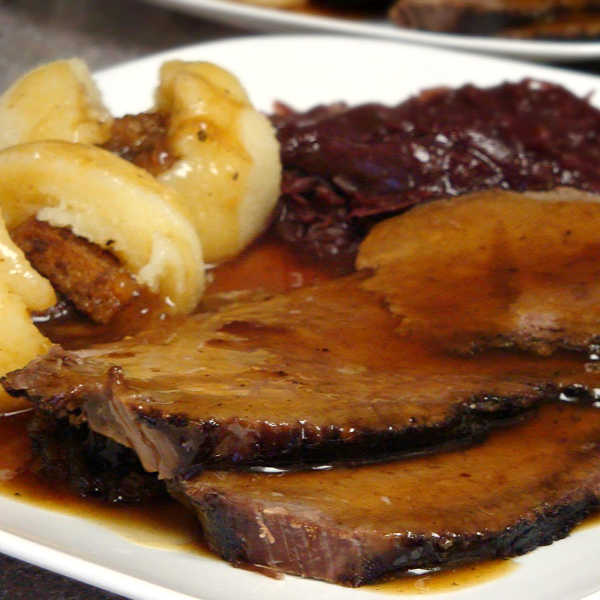 This traditional German sauerbraten recipe made in a slow cooker (or stove top) has an amazing gravy, either with or without gingersnaps. Tender flavorful meat, just like Oma makes.

"Wisdom is enshrined in an understanding heart; wisdom is not found among fools."