Learn how to cook pork hocks (aka pork knuckles), not just for Oktoberfest, but anytime you want something traditionally German and wonderfully delicious!

There are two main methods for cooking pork hocks. One is traditional in southern Germany and the other, in northern Germany.

And, although I'm a 'northern' girl, I must say, that 'southern' dish is absolutely fabulous. That yummy crackling is what everyone craves.

The southern one, Schweinshaxe, is a roasted pork hock, with a crispy-skinned crackling, that is common in Bavaria, especially for Oktoberfest.

In fact, if you're visiting Germany and are in the Munich area, this is one meal you'll want to order. Just make sure you're hungry because it's a huge order of meat: 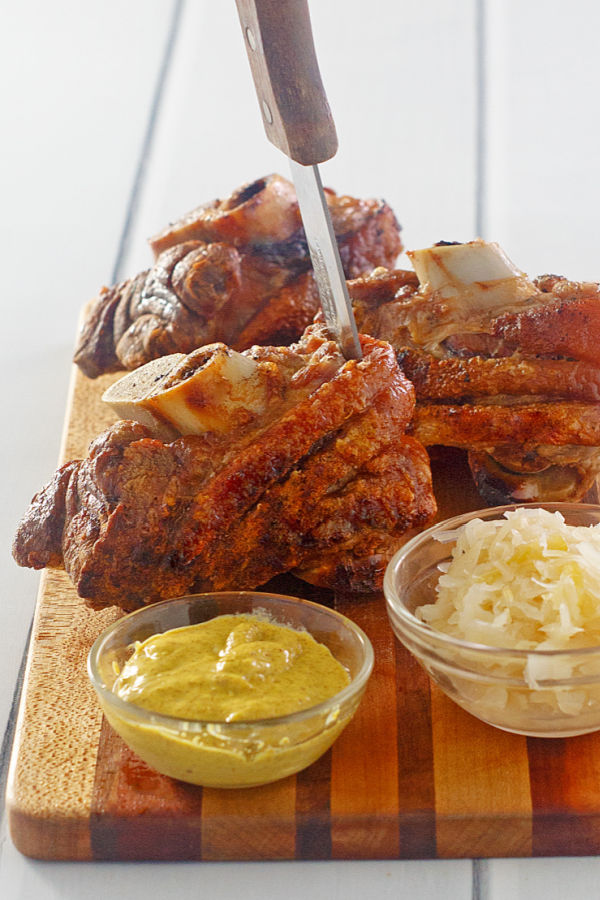 The northern one, called Eisbein, is a boiled pork hock, that's eaten with sauerkraut and puréed yellow peas. I must admit that it doesn't look as appetizing as the Bavarian one with all the fat. BUT, the meat is so tender. And the broth that resulted. Mutti made the most delicious soups with it.

To eat the hocks, one just digs out that meat and dips it into a bit of mustard. Oh. So. Good. My Opa (grandfather), on the other hand, loved all that fat and would devour it dipped with the mustard! That I couldn't do.

Pork hocks made the northern German way, served with mashed potatoes and sauerkraut. Mustard is on the side.

Is there a difference between ham hocks and pork hocks?

These are really the same part of the pig. Both are pork hocks, which are the ankle of the pig. However, the rear legs of the pigs are often called ham hocks.

Is there a difference between the Schweinshaxe and the Crispy Pata?

Crispy Pata is a Filipino dish that's often served with a soy-vinegar dip. They are boiled pork hocks that are chilled and then deep fried, getting a wonderful crisp skin. Soul food, Filipino style.

Since the cooking method is different, the taste will be different. But, similar all the same. Of course, traditional German recipes don't routinely, if at all, use a soy-vinegar dip.

Give us that sauerkraut on the side and we're really happy :)

What are pork knuckles and pork shanks?

Pork knuckles are just another name for ham hocks or pork hocks. The pork shanks, also called ham shanks, on the other hand, are just above the pork hocks and are a much meatier cut.

Both, though, have a lot of skin, fat, and bones.

What do I use for these Roasted Pork Hocks?

For the recipe below, use fresh pork hocks (ham hocks).

Smoked pork hocks won't work for these recipes. You may need to search at your local butcher for them. An Asian butcher may also have these if you have no German deli close by.

There are two basic recipes, both for Schweinshaxe, the southern one, the one that's enjoyed in Bavaria.

Both have a similar end result, although the first one has a more flavored meat. It uses both cooking on the stove and finishing off in the oven. It may sound like extra work. It really isn't and the results are worth it!

Here I've served the crispy-skinned pork hocks with sauerkraut and mashed potatoes. Mustard is on the side. Lecker!

The second, easier way to make Schweinshaxn is just to roast it, slow and long. Both are traditional and have their own followers, each claiming their pork hocks are the best.

However, the first way, the way I show you below, is the boil and roast method. It not only gives a yummy meat, it also produces a yummy broth that can be used to make a gravy, as well as for soups, etc. A two-in-one recipe, so to speak.

Can I use Smoked Pork Hocks?

Smoked pork hocks are great, however they will make this dish taste like ham. If you want the traditional "pork hock" dinner, the type you get at Oktoberfest, then buy fresh pork hocks.

Learning how to cook pork hocks so that they'll be similar to what can be had in Munich, really is easy.

Gather your ingredients together and prep your veggies. 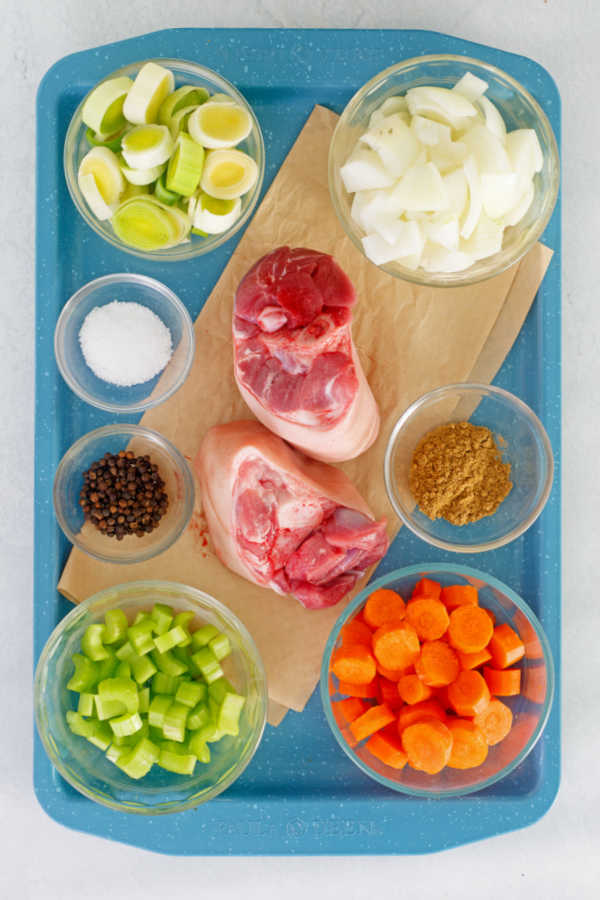 Put all the veggies and spices into a large pot. Add the pork hocks and hot water. Why hot water? It helps to quickly seal the meat and keeps the meat tender. 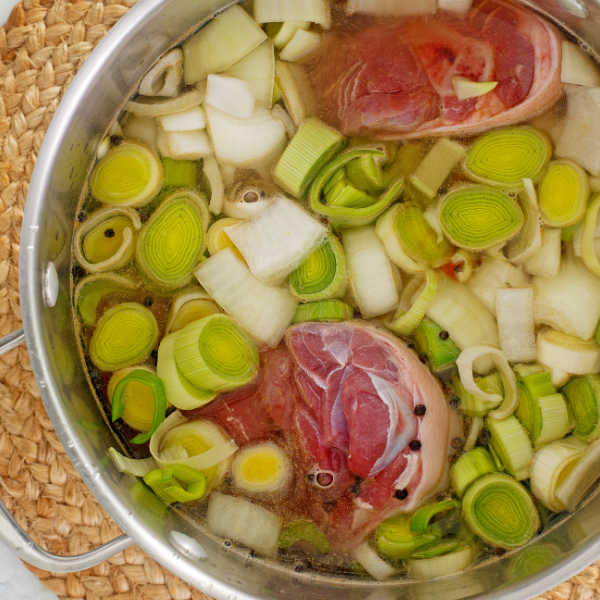 Put everything into one pot and heat to boil. Easy breezy.

Simmer until the meat is just tender. Do not overcook or else the hocks will fall apart. 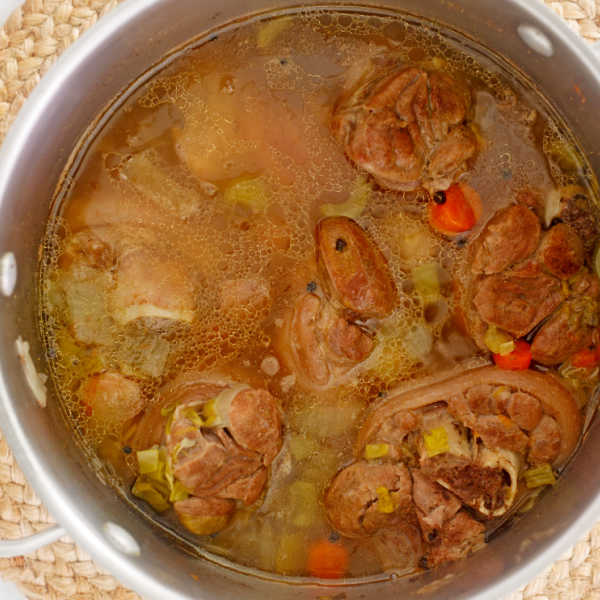 Cooked till just tender, these pork hocks are ready for the next step

Remove the hocks with a slotted spoon and stand them in a baking dish. Strain the liquid and set it aside. Place the cooked veggies around the hocks. 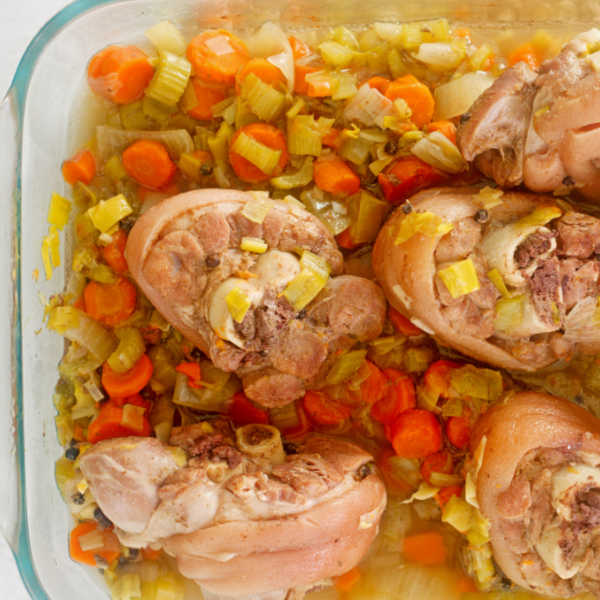 Pork Hocks ready for the oven

Depending on the oven, you may need to keep the hocks in for a bit longer than the 30 minutes to get the amount of 'browning' and 'crispiness' that you wish. 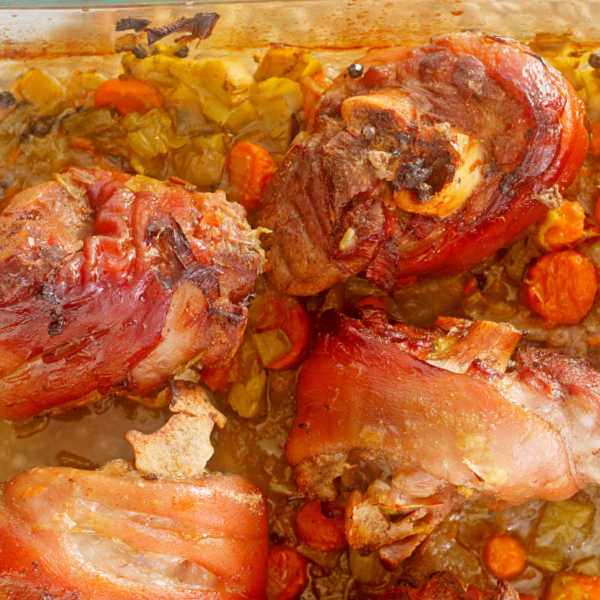 If they aren't getting brown and crispy enough (as shown above), turn on the broiler. Be careful though, that they don't burn.

Make sure that the base of the meat is in the liquid. To get a really crispy skin, do not baste the fat layer. It needs to be dry in order for the real browning to occur.

Fresh out of the oven, these pork hocks with their crispy skins are perfection! 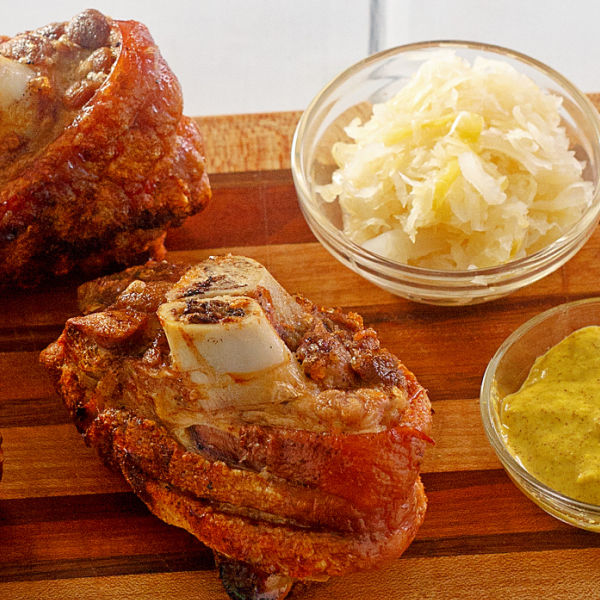 Crispy-skinned Pork Hocks, just like they are served in Bavaria. Sauerkraut and mustard on the side. Wunderbar!

Above, they are shown served with sauerkraut and mustard on the side. Throw in some German rolls, and dinner's ready!

What to serve with Schweinshaxe?

The roasted pork hock is the star of the show. Not much more is needed.

Top 10 Favorite side dishes include:

Add a bit of gravy, some German mustard, and you're good to go. A big stein of your favorite beer, of course, is the drink of choice.

Roasted pork hocks are not just for Oktoberfest, but anytime you want something traditionally German style and wonderfully delicious! There are basically two different ways to cook pork hock (pig knuckle): one, Eisbein, is common in southern Germany and the other, in northern Germany.

The southern one, Schweinshaxe, is a roasted pork hock, which has crispy crackling (crispy pork rind). 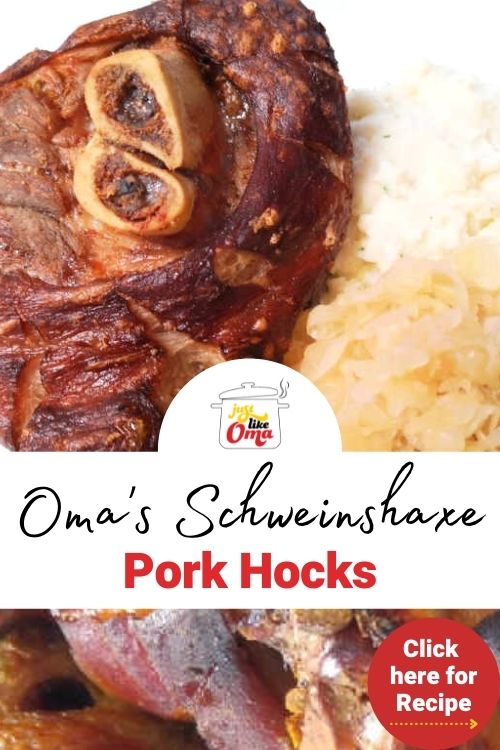 "For the Lord sees clearly what a man does, examining every path he takes."