This German goulash soup, aka Gulaschsuppe, is one of my most traditional of all German soups. It's also known as Mitternachtssuppe (midnight soup) when it's served at midnight on New Year's Eve.

It's one I often make when I have company coming over any time of the year and need something that's easy to prepare ahead. I'll add some fresh crusty homemade artisan bread and dinner's ready.

One of the best places to have this delicious soup is along the German Autobahn at the restaurants at the rest stops. I find that they make some of the best. A perfect on-the-go soup that's so satisfying, especially on a long trip.

I've even got a quick hack to make this wunderbar soup a lot quicker, easier, and cheaper. It's also easy to make a HUGE potful, making it wonderful for large gatherings where there are lots of hungry mouths to feed.

Check out the recipe and tips... and then watch the video below for the super quick hack to make this wonderful German food. Comfort food at its best.

Which beef cut is best for goulash?

The best cut for the job is either the chuck or flank. When using a thin flank, a cut from the belly, you will find that it works well for a slow cooking meal.

Thin flank cooks very moistly and is a very tender and flavorful cut, which is just what you want when making goulash!

Flank is a good all-purpose cut that can be used in so many different dishes. it is perfect for grilling, sautéing, broiling... anything really!

The difference between goulash and stroganoff?

Both goulash and stroganoff are such wunderbar comfort foods, but what's the difference between the two? After all, they seem so similar!

Well, the simple way to describe it is, goulash acts like a beef stew or soup, while stroganoff traditionally acts more as a sauce. Goulash is a very hearty meal made with flavorful cuts that take time to tenderize.

It is typically made in a slow cooker to let the meat sit longer, and the longer it cooks, the more tender! Goulash is often served over noodles and has a mixture of your favorite vegetables cooked with the meat.

When stroganoff is cooked it is done on the stove. A lovely mix of onions, steak, and mushrooms are pan-fried together, then adding in sour cream and brandy makes it into a thick sauce. This sauce is then traditionally served over rice.

Both dishes are quite similar in many ways though, as they both have sweet paprika incorporated which can make it difficult to even tell the two apart! The best part about meals like goulash and stroganoff is that you can always switch it up and try something different every time.

Adding your favorite veggie instead of the recommended, making your sauce as thick as you like, and also making your meats as tender as YOU prefer. That's my favorite part about cooking, it's all up to you!

Is Goulash from Hungary or Germany?

We, Germans, often served them with the potatoes on the side or even just bread or buns to dip into the amazing gravy-like broth.

However, even the German goulash can have potatoes in it, as shown in the goulash soup recipe below. If you're really, really curious about the Hungarian and German backgrounds, check out the History of Goulash. 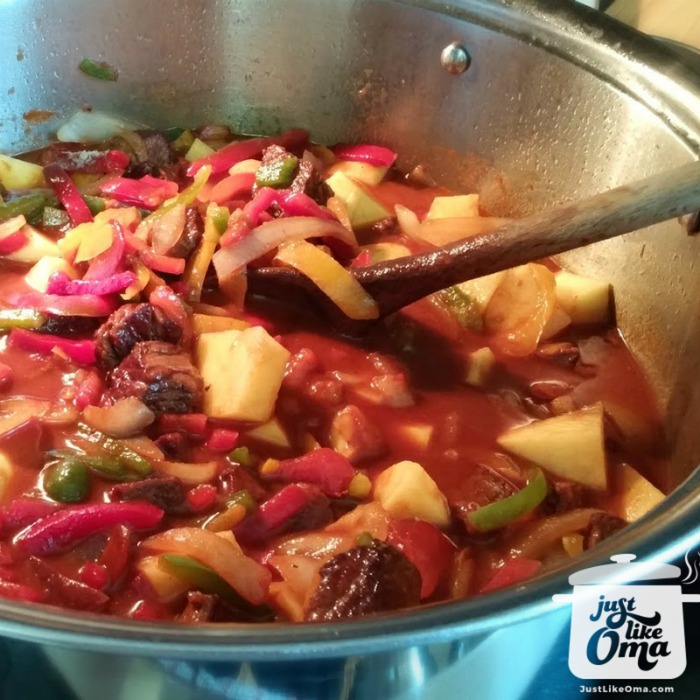 Above, I'm cooking a HUGE pot full of goulash soup, using the hack shown in the video. It's the way I'm making this soup more and more often. It's quicker and cheaper too!

Apparently, there are a few types of goulash, including American goulash. It is a dish similar to American chop suey (a pasta casserole made with ground beef, macaroni noodles, and a seasoned tomato sauce). American goulash, a southern comfort food, is a descendant, of sorts, of Hungarian goulash, where the only real connection seems to be the name, and the inclusion of beef and paprika.

Ready to make this hearty soup with its tender chunks of beef?

This German goulash soup, Gulaschsuppe, is one of my most traditional of all German soups. It's perfect for cooler weather and one I often make when I have company coming over and need something that's easy to prepare ahead.

Serve some fresh crusty homemade artisan bread with this bowl of hearty vegetable soup with tender beef and dinner's ready. 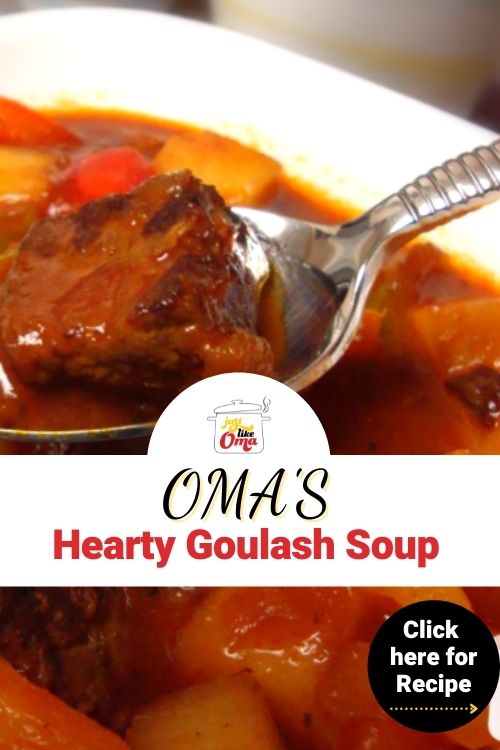 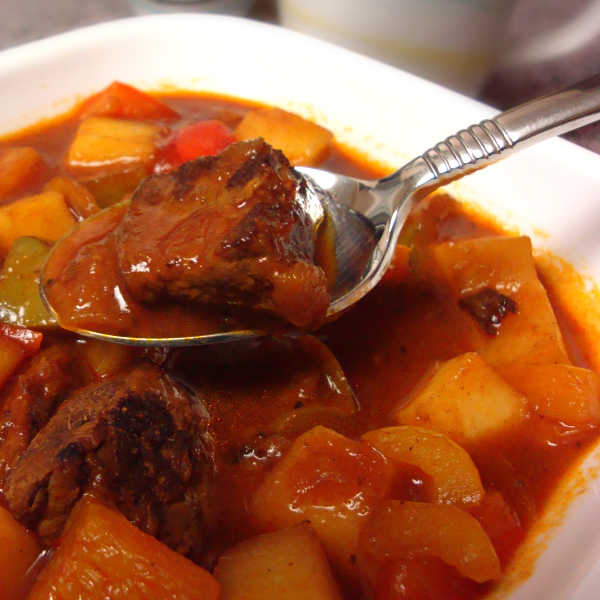 This goulash soup is one of my most traditional German soups. I often make this Gulaschsuppe when I have company coming over and need something easy to prepare ahead.

"For wisdom is far more valuable than rubies. Nothing you desire can compare with it."