If you need to know how to cook German sausage, look no further. My secret method is so easy and works for many German sausage recipes.

Bratwurst is one of the most popular German sausages, second only to the Frankfurter Würstchen (aka hot dogs), and is typically made from veal, beef, or pork.

The name Bratwurst is a German word that literally means fry sausage. Frying is probably one of the easiest ways to cook this delicious sausage.

The recipe for the actual sausage varies throughout the different regions of Germany; there are over 40 known Bratwurst varieties.

Bratwurst is often referred to as “brat” or “brats” for short.

Wurst by any other name ...

In Germany, there are over 1,500 types of sausages. That's hard to imagine, but it's true! Many sausage stores, aka Wurstladen, sell around 50 varieties each, making Germany the world's sausage capital.

The many varieties of sausages come with some very interesting names, such as:

The currywurst isn’t actually a type of sausage but a popular fast food dish in Germany that is made with bratwurst. The bratwurst is first steamed or boiled, and then fried. It is then topped with curry ketchup, a ketchup-based tomato sauce dusted with curry powder. It is often served with fries. German food at its best!

The History of Bratwurst

Bratwurst has been a popular dish in Germany for many generations. You may be wondering why this is. Allow me to share some sausage knowledge.

Many, many years ago, it wasn't always so easy to put dinner on the table for your family, so EVERYTHING was saved. Every scrap of food, every leftover, every veggie, and any kind of meat. During desperate times, nothing could risk being put to waste.

Any meat scraps that were harvested, received, or found would be gathered up and made into bratwurst sausages! Seeing as they can be made small, a large abundance could be made at a time.

This was a great way to get through the harsh winters and difficult times. Bratwurst quickly became a favorite among many in Germany, not just for the convenience, but the deliciousness too!

It is also said that bratwurst became the royal dish to be served in Frankfurt at coronations for the Holy Roman Emperors. Everyone would gather together in the main villages and roast locally made pork sausage.

Bratwurst was seen as a luxury during these celebrations because they would use nothing but the best ground pork available to prepare them.

It's pretty interesting to see how the history of bratwurst has changed over the centuries. At first, it was a way of survival, then used for celebrations, and now it is enjoyed all over the world: in pubs, German restaurants, and sold in stores.

But we will always give the early Germans credit for creating this classic sausage, and remember the struggle they went through centuries ago that led them to make it, and how it was passed down from generation to generation.

There are many different ways to cook sausage. You can cook them:

If you're looking for an easy way to make lots of sausages, baking is the way to go. That way you can make lots at the same time, limited only by the size of your baking sheet. You can also add sliced onions and/or bell peppers to roast alongside the brats for extra goodness.

BUT, the absolute best method to cook sausage? See right below.

How to cook German sausage for best results

The best way to cook sausage is a two-step process:

That’s it! Yes, it may seem strange to first boil the sausages. I mean, the most common way to cook sausage is to just throw them onto the grill or into the frying pan. And, that certainly works. BUT, those methods can often result in dried-out meat. 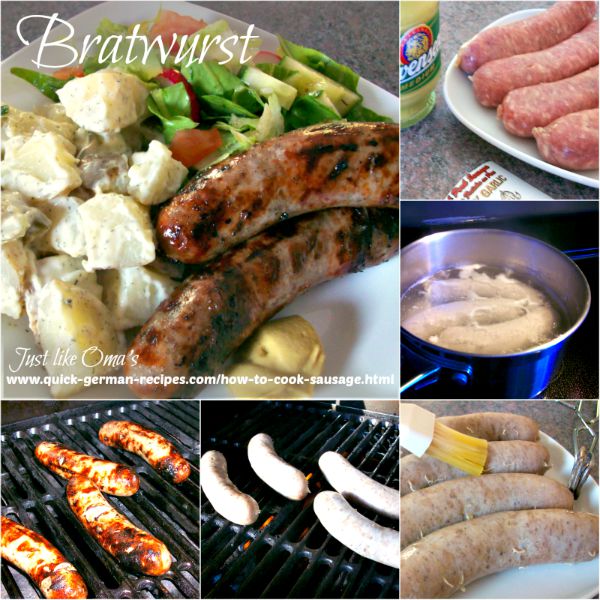 Simmering the sausage in liquid first helps to preserve the moisture and fat within the sausage. Once they are cooked through, they are quickly browned to seal in the moisture. What you end up with is a sausage that is moist and juicy on the inside and crispy on the outside.

Now that’s how to cook sausage!

How to serve Bratwurst sausage

These are absolutely fantastic when served with German potato salad, a fresh green salad, and a dollop of your favorite German mustard for dipping.

Another popular way to serve bratwurst is on hot dog buns or soft rolls topped with a yummy grainy mustard and sauerkraut. Sausage on a bun has a long tradition of being a staple dish at fall festivities such as Oktoberfest.

Here are other yummy ways to serve bratwurst:

When you think of Germany, what is the first thing to pop into your head? For many, it's the sausage of course!

When talking about sausages in Canada and the United States, it is usually the bratwurst that is talked about.

Bratwursts are raw sausages and can be gently boiled before frying or grilling.

They can also be purchased smoked, canned, frozen, or precooked, and can be made from any combination of pork, beef, or veal.

There are many different varieties of bratwurst that come from various regions of Germany, each with their own distinct flavors and seasonings, such as:

For more Bratwurst recipes, check out:

Ready to cook up some delicious German Bratwurst?

If you need to know how to cook sausage, look no further. My easy method for cooking bratwurst produces perfect sausages every time that will have everyone in the whole family wanting seconds. 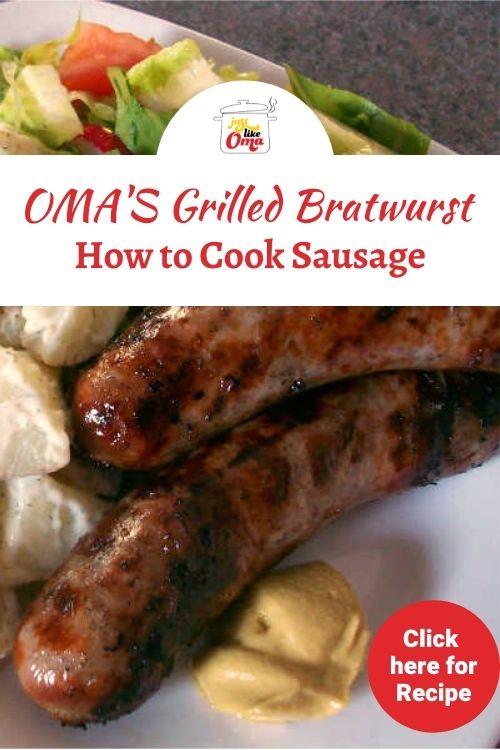 "Fire tests the purity of silver and gold, but the Lord tests the heart."

Top of How to Cook Sausage