Baked sausage? When I first thought about it, I really wondered if it would work. Why not? I love baked bacon. It's an easy way to make lots of bacon.

So, I tried doing sausages the same way. The result? Fantastic! A no-mess easy way to make a lot or a few.

Easy German meat recipes include these sausages baked (roasted) in the oven, simply because they're so simple to make without the mess! 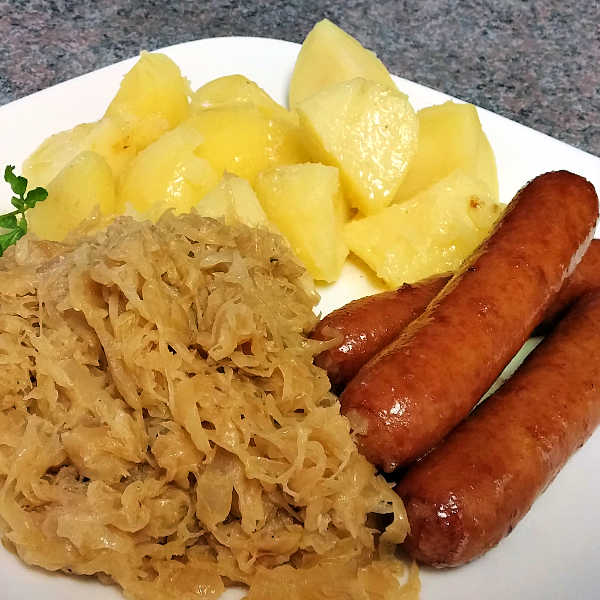 For flavor, I think nothing beats a charcoal grill to prepare sausage. Even a gas grill is a good alternative. But, when the weather's bad, it's raining or snowing, or one just wants to keep things simple, cooking the sausages inside is the answer.

The usual way to cook sausages is then on the stove top. However, when frying in a pan with butter or oil, the fat often splatters and the whole kitchen (make that the whole house) smells.

Enter the oven! Using the oven to 'bake' the sausage keeps the smell contained better and the splattering doesn't happen either. A win-win. And, one can make as few or as many as one needs. 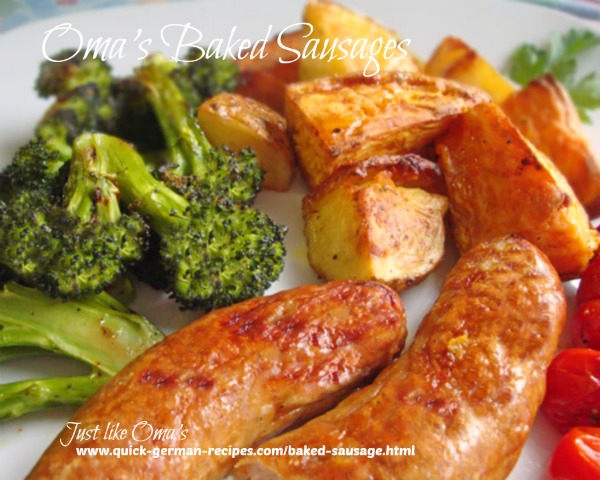 In the picture above, I've served these sausages with oven-roasted broccoli and roast potatoes. You get the picture?

Want other German sausage recipes? Here's one way that uses both the stove and the BBQ.

In Germany, Bratwurst is a generic name for sausages that are either fried or grilled. Well, doing them in the oven produces a similar result with the only real difference being that the grill marks are missing.

Some of the interesting names are:

Should you poke the sausages before cooking?

The answer to that is divided!

Ideally, you don't want to poke because all the goodness inside will start to come out. Those juices (and yes, the fat) is what gives you the flavor!

However, especially if you're grilling, it's easy to have the heat super high and those sausages will burst on their own, giving flareups and burned meat. If that normally happens to you, you can poke the sausages a little bit before, just not too much. You'll get a little bit of flaring up, but it shouldn't be as bad as if the whole sausage burst.

Ready to bake some sausage?

Baked sausage? When I first thought about it, I really wondered if it would work. Why not? I love baked bacon. It's an easy way to make lots of bacon.

So, I tried doing sausages the same way. The result? Fantastic! A no-mess easy way to make a lot or a few. 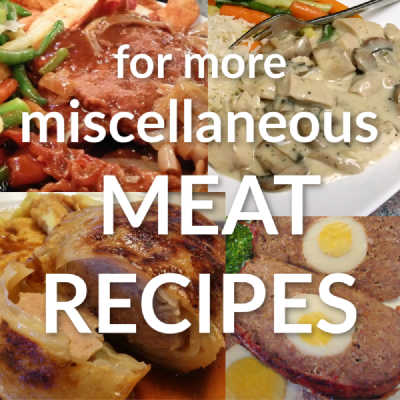 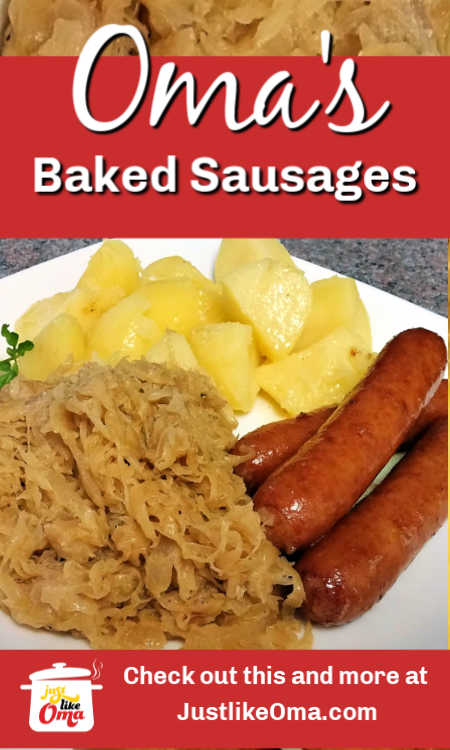 Baked sausage? What an easy way to make lots of sausages without the mess. Roast them alongside your other dishes and dinner's ready! It's Bratwurst im Backofen, Oma-style!

"Those too lazy to plow in the right season will have no food at the harvest."