Tarte Flambée, aka with its German name Flammkuchen or Flammekueche, is often considered a German pizza or flatbread that actually originates in the Alsace region of eastern France and the adjacent German border regions of Rheinland and Baden-Württemberg.

It's so delectably delicious, so quick and easy to make, and fun to get creative with. Enjoy this Alsatian specialty that’s SO traditionally German! The one below is my one of favorites with asparagus, bacon, and caramelized onions.

The word, flambèe, means that it is cooked in flames. Originally this was just a thinly rolled out piece of bread dough that was used as a test to see if the wood oven was hot enough and ready to bake bread. Soon toppings were added to enjoy on this piece of crisp-chewy crust.

The traditional Flammkuchen recipe topping is crème fraîche, covered with strips of bacon and thinly sliced raw onions, however I've been in restaurants throughout Germany that have an actual menu card full of variations, from savory to sweet.

Having neither a wood-fired oven or crème fraiche readily available, the following recipe is the one I use. In fact, I use an unleavened dough, making it extra fast.

From start to finish, it can be on the table in just over one hour. There are many versions of tarte flambée recipes, many with yeast or baking powder, some even using puff pastry. Creativity rules in this.

Have a Pizza Stone?

I've not done it this way, but this is what I've been told: If you have a baking stone, you can use it by preheating it in the oven for about half an hour at 500°F near the top of the oven.

Transfer the unbaked Flammkuchen to the stone with a pizza peel, just as you would a pizza. This should bake in about 10 minutes. If needed, turn the broiler on for about 3 minutes to brown the top.

Here I'm making Tarte Flambee with sliced asparagus, caramelized onions, and rendered diced bacon. This is going to be SO good! 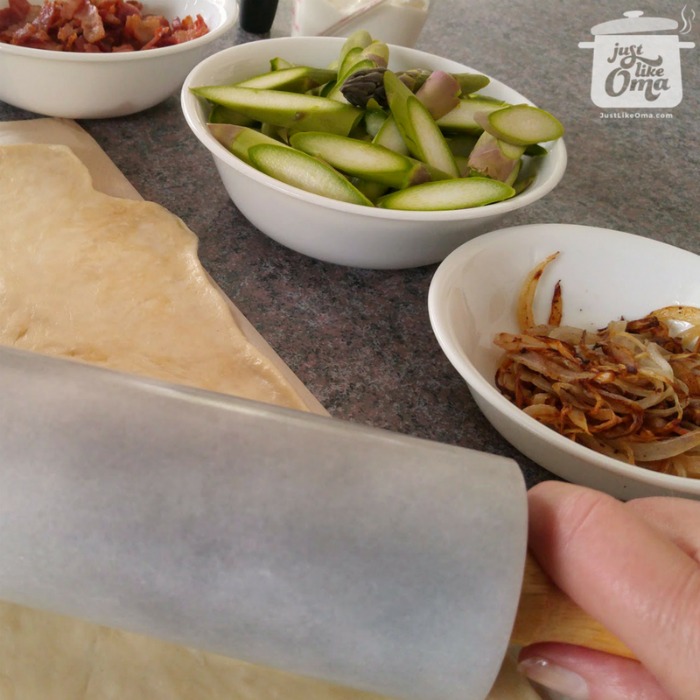 This one is ready for the oven. 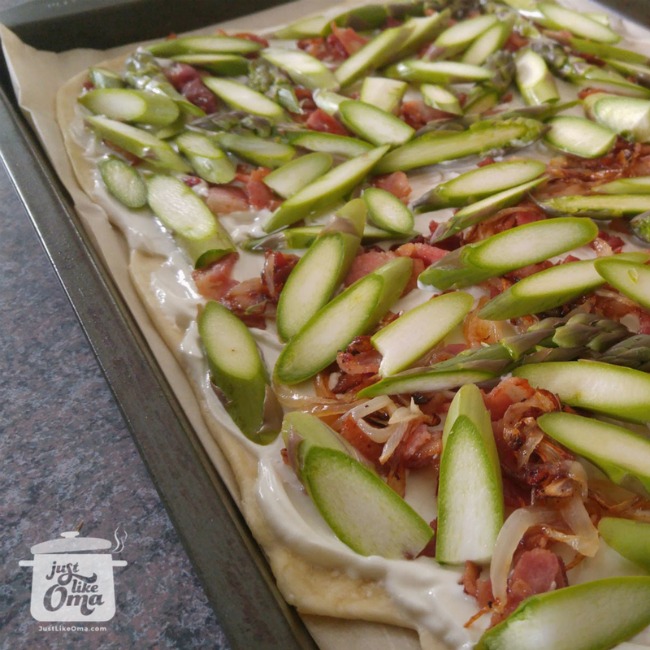 What to put on top of Flammkuchen

There are so many different toppings that are served on the Flammkuchen. Traditionally, it's just the raw onions and thin strips of bacon. However the following additions and combinations are all delicious for a savory tart:

Make this as a dessert by topping the thin dough with sliced apples, cinnamon, and sugar on top of the Greek yogurt.

Yep. Hummus. Sylvie, my daughter-in-law, shares that hummus is delicious with this quintessential German dish. Her easy hummus recipe is so quick to make and it's becoming wildly popular in Germany. Try it. I think you'll like it too!

Ready to make this Flammkuchen?

Tarte Flambee, aka Flammkuchen, is German pizza with a twist! So easy to make, quick and easy to get creative with. Enjoy this Alsatian treat that’s SO traditionally German! It's so delectably delicious and can be made with many variations.

This one is my favorite with asparagus, bacon, and caramelized onions. 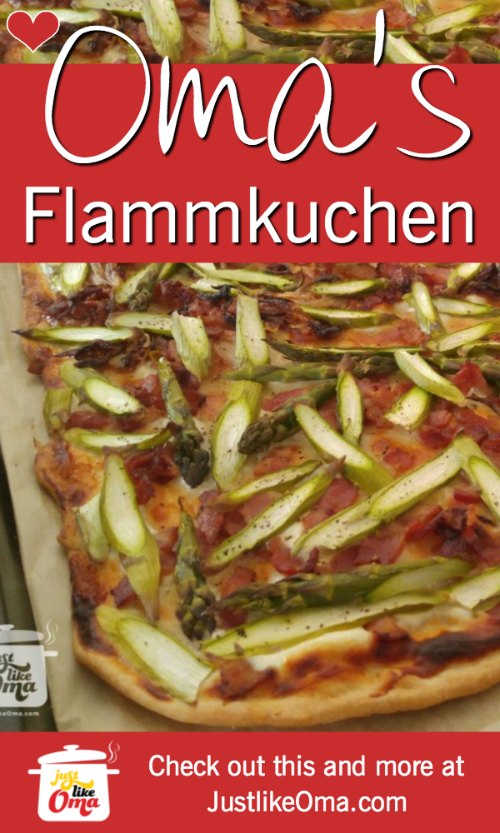 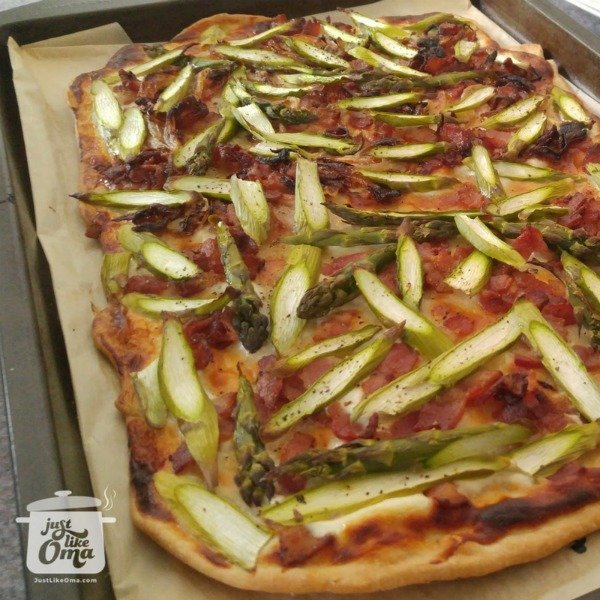 Tarte Flambee, aka Flammkuchen, is often considered a German version of pizza. Really, it's totally different. It's so delectably delicious and can be made with many variations.

Words to the Wise:

"The instruction of the wise is like a life-giving fountain; those who accept it avoid the snares of death."