My German Apple Pancake recipe, aka Apfelpfannkuchen, is so easy, so quick, and so absolutely wunderbar!

This delicious German pancake is based off an authentic German Pfannkuchen recipe, but is also known by many other names, such as Dutch baby pancake, Dutch babies, Bismarck, Dutch puff, puff pancake, puffed apple pancake, and caramelized apple soufflé pancake. All interesting names for a wonderful dish!

As for us, we call it Apfelpfannkuchen, or, German Apple Pancake. Whatever you want to call it, it is absolutely scrumptious! If you have company, this is sure to impress. 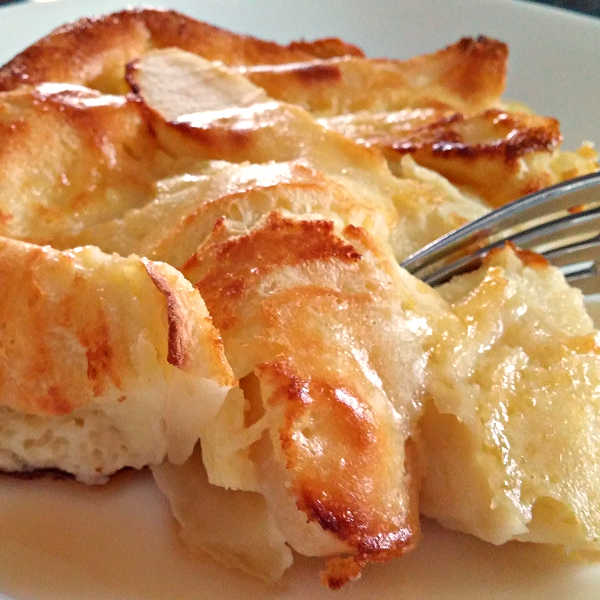 This puffy oven pancake is typically served for breakfast or brunch, but it's also perfect for a quick weeknight dinner, and it can also make a wonderful dessert when served with a scoop of vanilla ice cream. Yum!

What is a German pancake (Dutch baby)?

A Dutch baby pancake recipe resembles more crepe-like pancakes than a traditional pancake recipe because it is not made with a leavening agent such as baking powder. It's very similar to a large popover or Yorkshire pudding.

Unlike most pancake recipes, a German pancake is baked as a single large pancake in the oven, rather than multiple smaller pancakes fried individually on the stove top.

As the Dutch baby bakes, the sides puff up beautifully along the edges of the pan while the center is more custard-like. Absolutely wunderbar!

Is this recipe really German?

The idea of a Dutch baby pancake may have been derived from the German Pfannkuchen, but the current form seems to have originated in the US in the early 1900s.

According to the most popular origin story, Dutch babies were introduced in the United States in the first half of the 1900s at a family-run restaurant in Seattle, Washington called Manca's Cafe.

A Dutch baby recipe is typically made without fruit. Adding the apples to this yummy puffed pancake makes it even more German.

How to make this German Apple Pancake recipe

If this is your first time making this German pancake, it just might become your favorite way to make pancakes from now on. It's baked in the oven, so you're not standing there, making one pancake after the other on the stove top. Surely an easy way to make delicious-tasting German food!

Start by mixing together 6 large eggs with some milk, flour, sugar, and salt. This can be done with your blender or food processor. Or, if you prefer, use a stand mixer with a whisk attachment. Or just put it all in a large bowl and use a regular hand mixer or whisk. Anything works! Just make sure the batter is mixed until smooth, but don't over mix it.

Put 8 tablespoons of butter in a baking dish or ovenproof skillet and place in the oven that has been preheated to 425 degrees F to melt the butter.

Then add thin slices of apples to the baking dish and leave it in the oven until the butter sizzles. This can take about 5 minutes.

Remove the baking dish from the oven and pour the batter over the warm apples. Sprinkle with some brown sugar, if you wish. (Personally, I usually leave out the brown sugar. The pancake is sweet enough... especially when accompanied with wonderful local Canadian maple syrup!)

Return the dish to the oven and bake 20 minutes or until the edges of the pancake are a deep golden brown and nicely puffed. Depending on the dish size (see the video below), this can take an extra 5 to 10 minutes.

You'll see that it's sort of like a soufflé. It's nicely puffed as soon as it's out of the oven, but will slowly fall as you start to serve it. 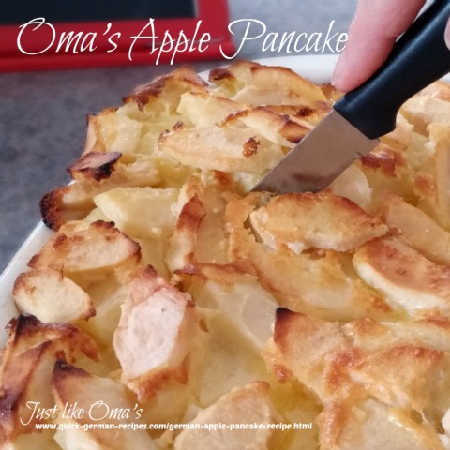 That's why I usually call everyone to the table, just before I'm ready to serve. That way, they get to see it in all its puffed splendor. 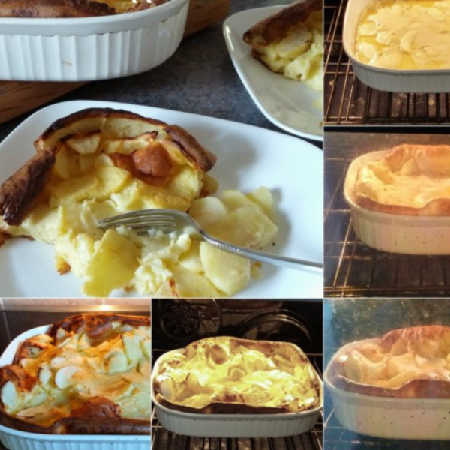 If you end up with leftovers, they taste great cold as well. :)

There are also several size dishes you can use, depending on how you like your German oven pancake. Let me show you what I mean:

I had some buttermilk that needed to be used. I thought, "Why not try it in this German apple pancake recipe?" I made no changes to anything else. Just subbed the buttermilk in place of the regular milk.

YUMMY! In fact, I may just plan on buying buttermilk on purpose, just for this.

The resulting pancake with the buttermilk is just a bit fluffier. Wunderbar! Here's how it looked: 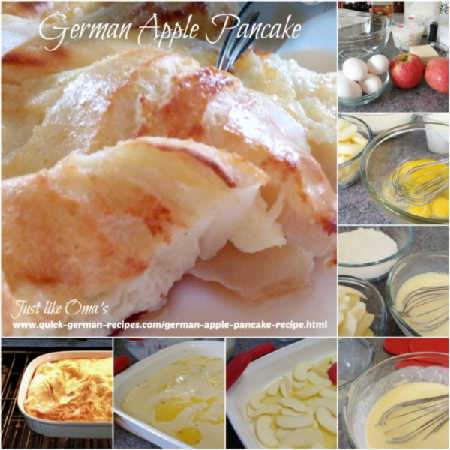 If you'd like extra fluffy pancakes but don't have buttermilk at home, you can easily make a substitute by adding vinegar or lemon juice to regular milk.

To make 1½ cups of buttermilk substitute, add 1½ tablespoons of vinegar or lemon juice to a liquid measuring cup. Then, add milk to the 1½-cup line and stir.

I used this German apple pancake recipe to show my two young granddaughters how to make pancakes. Their dad likes to make them pancakes on Sunday mornings, but this one is just a bit different from what they are used to.

It's become an "Oma" tradition when they sleep over. That's what they come to expect for a late breakfast the next morning. Late, because it's always holidays and we stay up late the night before.

Because it's usually late in the morning, this oven-baked puffy pancake filled with fresh apples and served with maple syrup is usually all they want until an early afternoon snack.

In fact, it's become a comfort food for us. I'll often make this German pancake recipe for supper for hubby and I after a busy day and I've not had a chance to prepare anything. The ingredients for this are always available in my pantry and fridge. Easy breezy supper that we both love.

What to serve with fluffy German pancakes

This recipe is delicious all on its own, sprinkled with a little bit of powdered sugar and/or drizzled with maple syrup. But if you're having company or you just want a more substantial meal, here are some ideas.

You can stick to an all-sweet breakfast, brunch, or dinner:

Or you can add other breakfast favorites for a sweet-and-savory affair:

My German Apple Pancake recipe, aka Apple Dutch Baby, is so quick and easy to make and tastes absolutely wunderbar! Made with simple ingredients, this is an easy breakfast casserole or brunch dish that the whole family will love.

It's also one of those special breakfasts that is perfect for Christmas morning, since the batter and the apples can be prepared a day ahead of time. 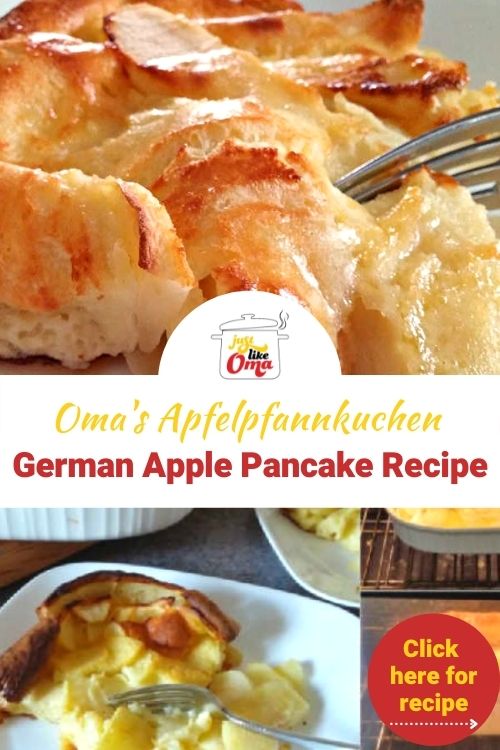 "The heart of the godly thinks carefully before speaking; the mouth of the wicked overflows with evil words."