Want homemade Cream of Mushroom Soup, aka Pilzcremesuppe or Champignonsuppe, without all the fuss? This recipe is so easy and quick to make. It's a recipe for mushroom soup you'll use over and over.

But it certainly tastes like it. It's one of those quick and easy dinner recipes that uses items you probably already have in your pantry.

How do I know that?

Well, my Mutti was the best German cook there was. She made everything from scratch (or so I thought!).

That very last time I visited her, she served a mushroom soup that I just loved. I was very touched that she would go through all that work just for me (she hadn't been feeling well).

And then she shared her secret for her favorite among her quick soup recipes and here it was: canned soup and "fried" canned mushroom pieces! WOW!

If you're wanting a real homemade cream of mushroom soup FROM SCRATCH, here's the one I use: Oma's Cream of Mushroom Soup.

BUT, if wanting Mutti's version, a quick and easy version that tasted homemade, then that's the recipe that's here ...

Want homemade Cream of Mushroom Soup, aka Pilzcremesuppe or Champignonsuppe, without all the fuss? This recipe is so easy and quick to make.

From scratch? No. But it certainly tastes like it 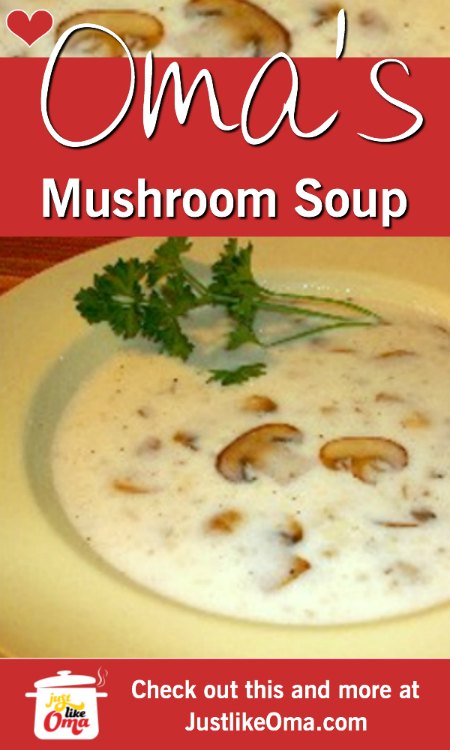 A Homemade Cream of Mushroom Soup that is really easy, really quick, and really, really good? You'll never think it all came from a bunch of cans! Really!

"Don’t fret because of evildoers; don’t envy the wicked. For evil people have no future; the light of the wicked will be snuffed out."