Celebrating Thanksgiving and all you can think of are turkey,  stuffing, the cream-based sauces, the buttered mashed potatoes, and the pumpkin and pecan pies?

For me, Thanksgiving has a totally German feel as we celebrate Erntedankfest with traditional German foods. 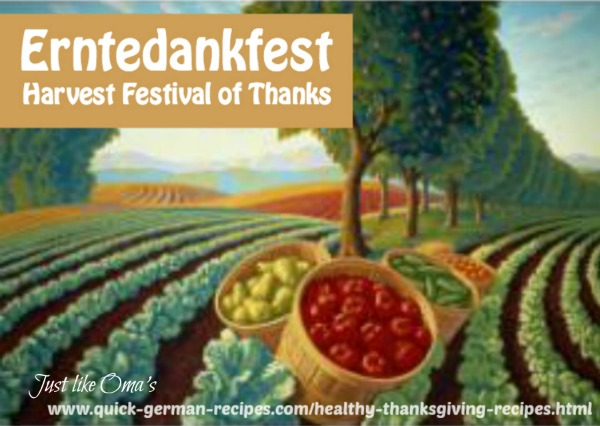 Traditional as far a German foods go. There's really no one meal for this holiday that's served throughout Germany. For us, and for most Germans, it was what we all liked the best. And, that's rouladen, red cabbage, and potato dumplings with lots and lots of wonderful rouladen gravy.

Although potato dumplings are a favorite at our house, making Spätzle is a wonderful side dish for this. Especially with the gravy!

Our German Thanksgiving Day celebrated in Canada starts as a day of thanksgiving for all the blessings we've received.

This is pretty much the same for everyone - based on the original story of the first Thanksgiving celebrated by the English settlers in America after the harsh winter in Plymouth, Massachusetts.

Celebrated in the United States on the fourth Thursday in November, it is celebrated in Canada on the second Sunday of October. In Germany, it is often celebrated on the first Sunday in October and is called Erntedankfest (meaning "harvest festival of thanks").

So, if you really like celebrating holidays, you could do Thanksgiving three times, just doing what these three countries do!

While turkey and all the trimmings are considered by many to be a traditional Thanksgiving dinner, some people use ham because they like it better.

Using that same thinking, we adopted our own customs. We chose to celebrate with our healthy Thanksgiving recipes cutting down on the fats and creams in the rouladen, red cabbage, and potato dumplings. Dessert was usually whichever cake was the family favorite at the time with a healthy alternative of a fruit tray.

Yes, it really was rouladen - not the easy and cheaper version of flatladen. It was extra work, but this was for a very special day.

Why our Thanksgiving is SUPER special:

For our family, Thanksgiving is an extra special day. Our middle son's birthday is October 12. We often celebrate both at the same time. Our tradition is that the "birthday child" could choose his dinner.

And what does Michael usually choose? You guessed it, "Rouladen, red cabbage, and potato dumplings." And that's how traditions start!

"Stolen bread tastes sweet, but it turns to gravel in the mouth."