I LOVE cheesecake. Especially this traditional German cheesecake recipe, aka Käsekuchen. It's lighter in texture and fluffier than the dense New York-style American cheesecake. And it's so deliciously satisfying and easy to make.

A traditional recipe that's really easy to make? YES! It tastes just like you're back in Germany… with a little change to make it easier! 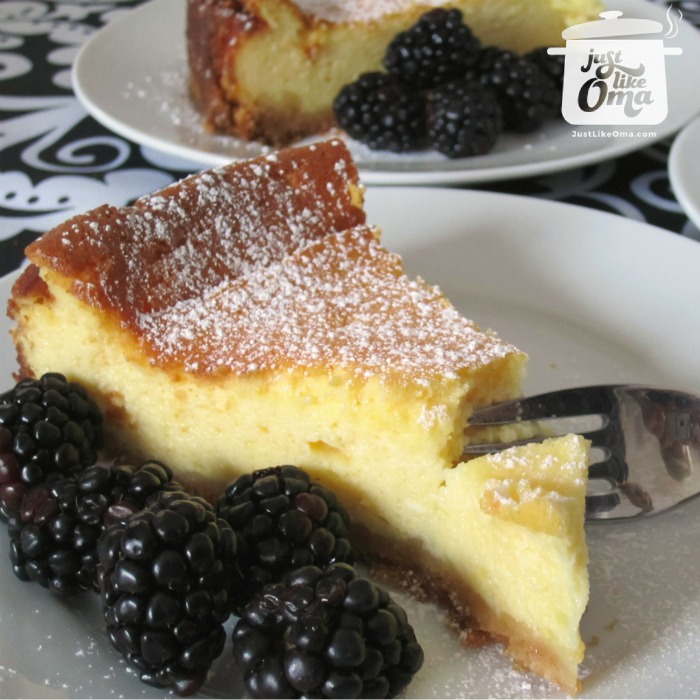 Well, instead of making a Knetteig crust, I use crushed cookies, such as German Butterkekse (when available), 'cause it's easier and, I think, tastes great!!

The biggest difference between a German cheese cake and American versions is that one uses Quark instead of cream cheese.

American cheesecake is made with cream cheese and has a graham cracker crust. It is a very dense, rich, and decadent cake.

A classic German cheesecake is made with Quark and has a shortcrust pastry as its base. It is light and fluffy with a wonderful tangy flavor.

Many variations of this authentic German recipe

If you search for an authentic German cheesecake recipe, you'll find that there are many variations. The one thing they all have in common is the low-fat Quark.

They all include eggs, but some recipes call for adding the egg yolks separately from the egg whites (the egg whites are whipped and then folded into the batter), while others add the eggs in whole.

Butter is commonly used, although some recipes call for oil, or even cream cheese, instead.

Some recipes will include sour cream, heavy cream, or a combination of the two.

Some recipes use all-purpose flour, while others omit flour altogether.

All these different cheesecake recipes claim to be an authentic German recipe. I guess, perhaps, what makes them truly authentic is the use of Quark.

Speaking of Quark… what is Quark?

Quark is a type of fresh dairy product made by warming soured milk until the desired amount of curdling is achieved, and then straining it. It is traditional in the cuisines of Baltic, Germanic, and Slavic-speaking countries.

Dictionaries sometimes translate it as curd cheese, cottage cheese, farmer's cheese, or junket. But in Germany, quark and cottage cheese are considered to be different types of fresh cheese.

While Quark is technically a soft cheese, it has a texture of, and tastes more like, a thick yogurt - smooth and creamy with a mild, plain taste that's neither sweet nor sour. This is why you'll often see Greek yogurt suggested as a good substitution for Quark.

The only problem is that Quark is not yet widely available throughout North America. But thankfully, if you're unable to find it at your local grocery store or European market and deli, there are substitutions available that you can use instead. Thick Greek yogurt is the most common substitute used, but other recommendations are mascarpone cheese, ricotta cheese, and cottage cheese (blended smooth).

However, you also have the option of making your own homemade Quark (including vegan Quark!) which is very easy to do!

How to make Quark

Check out my page on making your own Quark here, or follow these quick steps below. 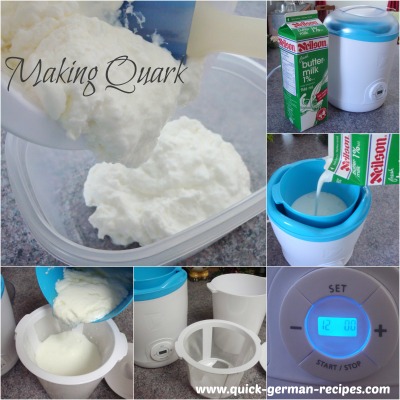 > Use a Yogurt Maker

Easy way to make Quark... use a Greek yogurt maker (I use Dash Greek Yogurt Maker) and buttermilk. 12 hours 'incubation' and 6 hours draining in fridge (I did 10 hours accidentally and it was a bit thicker than normal).

You can also do it in the oven, but the yogurt maker leaves the oven available for other uses. (Quantity: 4 cups buttermilk = 1.75 cups quark)

Don't have a yogurt maker? Don't fret! You can still make Quark. Pour the buttermilk into a large casserole with lid. Let it sit in the oven overnight (at least 8 hours) at the lowest temperature possible, no more than 150°F.

Line a large sieve or colander with a clean cloth. Pour the "cultured" buttermilk into it and let it sit to drain in the fridge for 6 hours or so.

This cake was brought to my attention by my dear Facebook friend, Anna Hanssen, who shared the recipe for Der beste Kaesekuchen der Welt. She gave me some of her adaptations and then I added my own changes.

Ready to bake this German Käsekuchen?

Learn how to make cheesecake, aka Käsekuchen, just like it's made in Germany. A traditional recipe that's easy to make and tastes just like you've had in Germany... with a few little changes to make it easier! 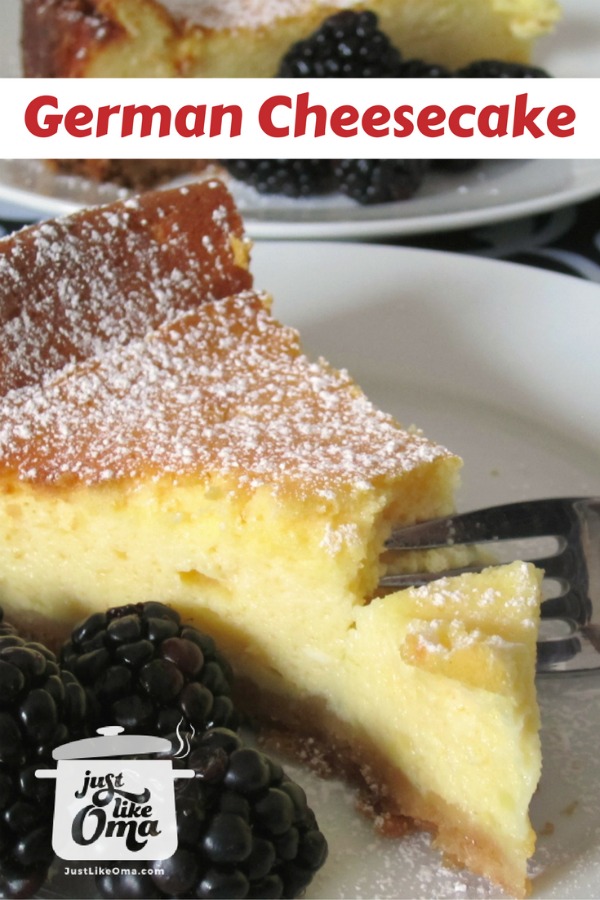 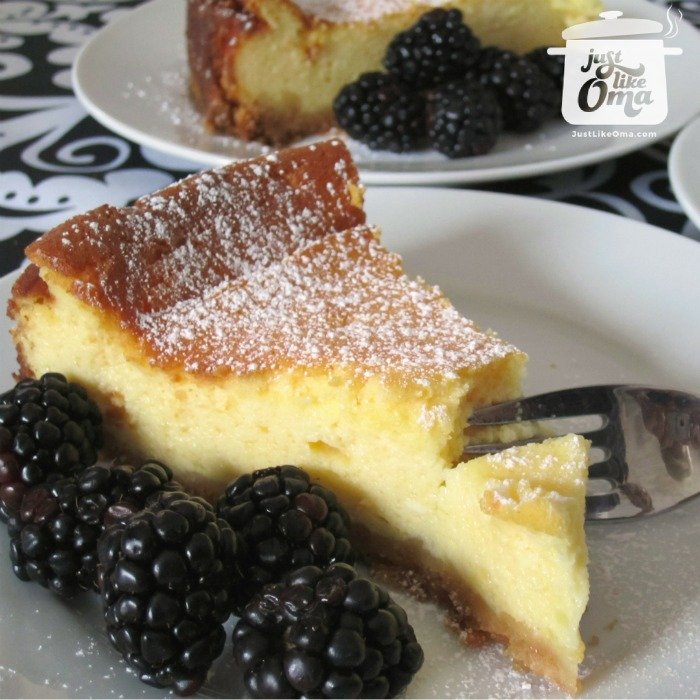 Learn how to make this German cheesecake recipe and this includes an easy recipe for making quark ... at home! Tastes just like you’re back in Germany in Oma’s kitchen!

"Acquitting the guilty and condemning the innocent -- both are detestable to the Lord."