Wurstsalat ... a traditional meat salad from southern Germany, is shown below at the front of the photo. In the north, it's Fleischsalat, shown behind it.

However, this is sometimes not the case and a southern one will have mayo and a northern one not! Try them both. Then, choose your favorite. Both are wonderfully different and delicious!

There are so many variations for both of these. Check below for lots of ideas on making this meat salad that's traditionally just served with some German bread or buns. 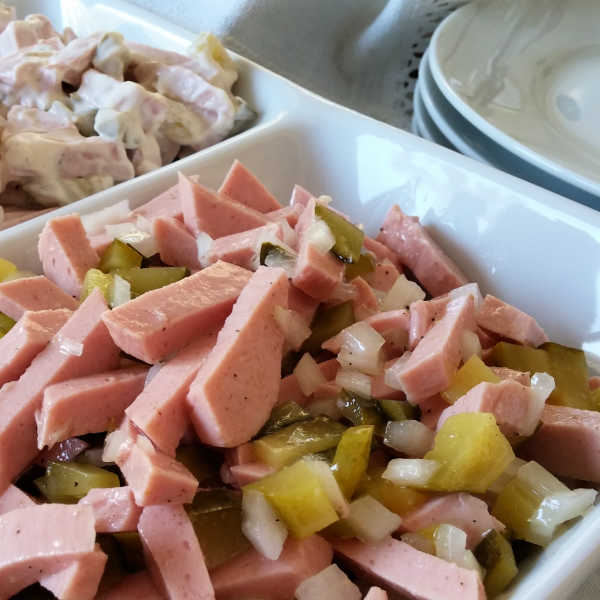 As well, one of our Facebook fans, Christian, sent in the one his wife makes. The recipe is right near the bottom of the page and includes a collage so you can see the way she makes it.

Here are some optional additions ...

These additions work with either the Wurstsalat or the Fleischsalat. Try them individually or combine several.

Check out the recipe that Garry Brotschul sent in. He calls it Bayerisches Fleischsalat, but I think most would call it Bavarian Wurstsalat! You check it out and let me know what you'd call it!

You'll need just a couple of ingredients, but chose the best brand of each that you can get. It really does make a difference in the final product. German Lyoner sausage is best. If you can't find that, then get the very best bologna you can find. Using a cheap cut will taste cheap.

Below, I've decided to make both the Wurstsalat and the Fleischsalat to provide a perfect pairing for a quick supper for hubby and I. 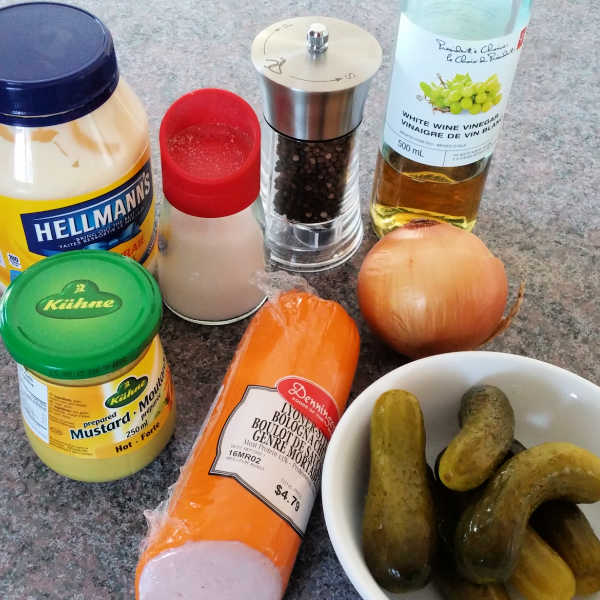 The process is the same for both salats. Cut into the meat into matchsticks if you're wanting to be traditional. Or else, just be creative and cut into strips or cubes.

For my Wurstsalat (the one without mayo), I'm adding just the basics. 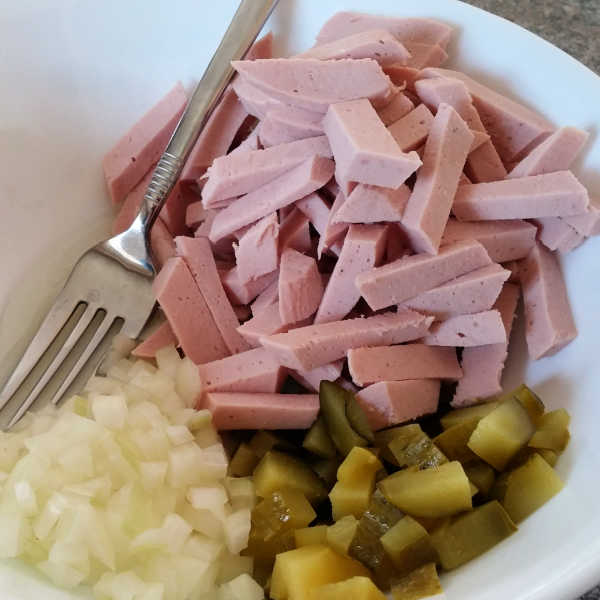 For the Fleischsalat, I'm omitting the onions. The reason? My hubby's not a fan of raw onions.

If you like onions, do include them. If you're sort of so-so about onions, you can always just soak the chopped onions in some water for about 10 minutes, drain, and then add them. This will remove some of their sharpness. 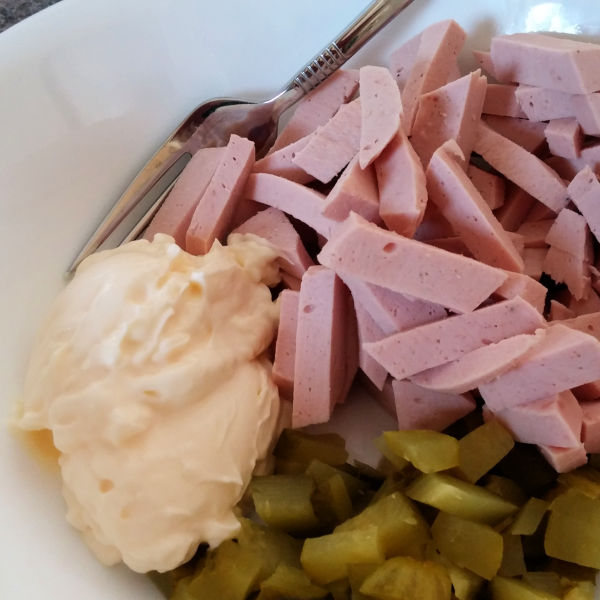 These salads are ready to serve immediately. Like some other salads, letting them marinate a bit in their dressings is also a good idea. Just make sure you keep these cold in the fridge until you are ready to serve. 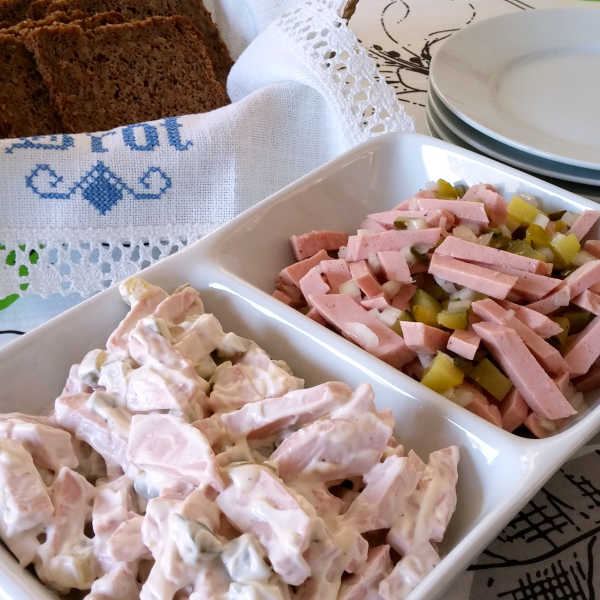 I like to make my Artisan Bread. It's so easy to make (just have to allow time for the resting and rising) ... and it almost tastes like German Brötchen. It goes so good with both of these meat salads!

What to serve with these Meat Salads?

Aside from the traditional bread or Brötchen, serving either of these meat salads with a side of Bratkartoffeln (fried potatoes) makes for a wonderful lunch or light supper.

Variations of these Meat Salads

There are some traditional versions of Wurstsalat, most notably the Swabian one, Schwäbischer Wurstsalat, which includes of blood sausage.

There's also the Swiss version, Schweizer Wurstsalat, that uses a Swiss sausage called Cervelat and naturally has Swiss cheese in it, such as Appenzeller oder Emmentaler.

The Strasburg one, Straßburger Wurstsalat, also includes Swiss cheeses, such as Emmentaler oder Bergkäse, but uses the Lyoner sausage.

And there's the Elsässer Wurstsalat from the Alsacian region also uses Emmental cheese and uses the traditional Swiss Cervelat.

And then of course, there's a mixing up of these with other sausages, meats, and cheeses, proving you can add what you want to create your own version.

What's the difference between Wurst and Fleisch?

Wurst means "sausage" and Fleisch means "meat". For the both the Wurstsalat and the Fleischsalat, the same type of meat can be used. Remember, all sausage is made from meat, so for me, the difference in names only.

Usually a Lyoner sausage, which is a type of bologna, is used to make both. However, any type of sausage and even cooked meat can be used to make either of these salads.

For both salads, the main difference really is just in the dressings. One with mayo and the other without.

Ready to make some Wurstsalat and Fleischsalat? 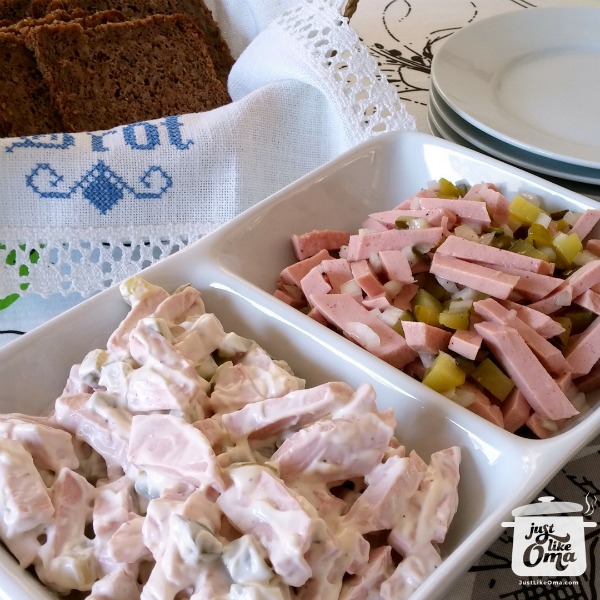 Wurstsalat ... a traditional meat salad from southern Germany. Traditionally, it's made without mayonnaise as are most salads in the south.

Ready to make some Fleischsalat?

Fleischsalat ... a traditional meat salad from northern Germany. Traditionally, it's made mayonnaise as most salads in the north. 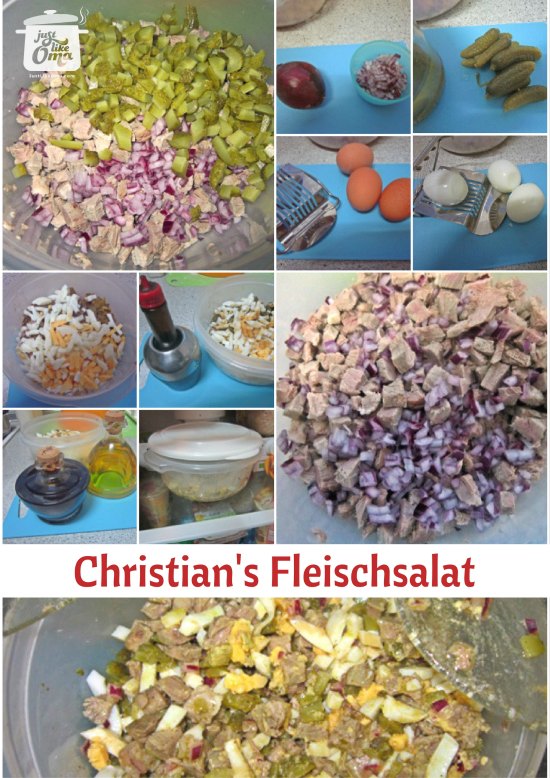 Follow along with Christian's photos as his wife makes his favorite Beef Salad.

One of our German Facebook fans, Christian Spallek, sent in the above photos and instructions of the Rindfleisch Salat (Beef Salad) made by his wife.

He says that whenever she makes a Beef Soup (one of his favorites), she’ll buy double the meat. She’ll take half the cooked meat (about 1.5 lb) as leftovers for her delicious and easy Beef Salad, made just the way her mother makes it. 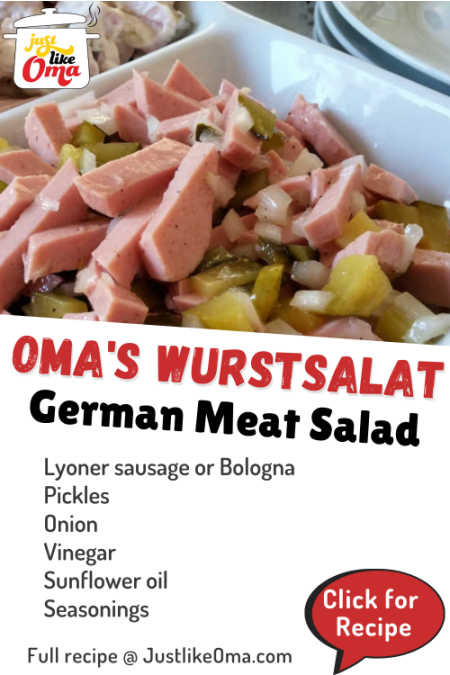 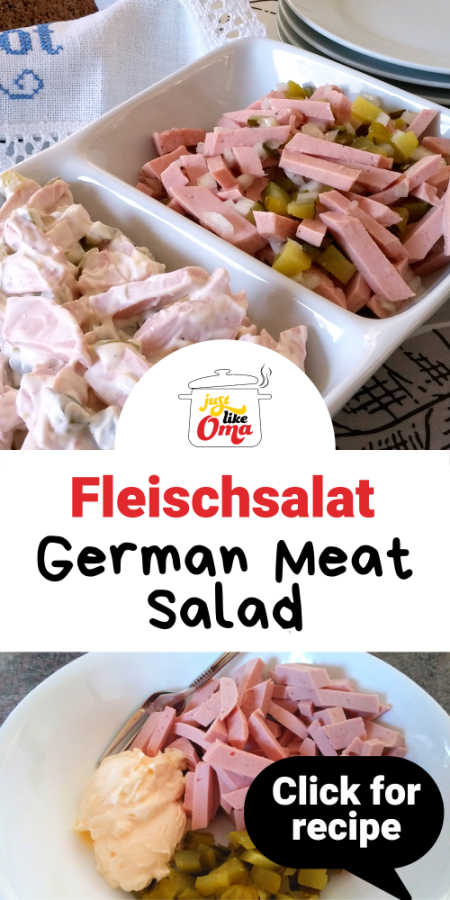