Oma's best German potato salad recipe with dill is traditional in northern Germany. Yes, this Kartoffelsalat is made with mayonnaise. In the south, it's often made without mayo and the link for that one is down below. Both are authentic and wunderbar!

This creamy dill potato salad recipe comes from my Mutti's handwritten cookbook. She usually kept this classic potato salad as a perfect side dish when company came. Now we have it for a summer cookout, family reunions, or just because! It's always a treat.

Mutti's signature presentation for this creamy potato salad included crumbling cooked egg yolks over the top with finely chopped cooked egg whites as an outer ring. A sprig of parsley finished it off. People hesitated to dig in to the serving bowl because it always looked so pretty. They didn't hesitate long though! After all, this is German food at its best!

And yes, this one is German. In fact, the mayonnaise in this tells me it's from the northern part of Germany. Southern Germany's salads rarely have mayo. Looking for the best potato salad without mayonnaise? Take a look at this non-mayo bacon and vinegar potato salad.

It seems like there are as many traditional recipes for German potato salad as there are German Omas (grandmothers). Each has just a slight difference, meaning, there's no ONE way of making this very traditional German food.

Above, I've served this flavorful potato salad with a very German Knackwurst, aka Knockwurst, which comes from the northern part of Germany. A perfect pairing. Add some German or dijon mustard and this is real German food! You can even make your own homemade mayonnaise for this with lemon juice and olive oil. Easy breezy!

When questioned about the authenticity of its German origins, I did some research. Each family, it seems, has their own way of how to make potato salad. And each is delicious.

In northern Germany, most potato salads are cream based, such as this one below, my personal preference. My Mutti, coming from Berlin, made it this way. It's the only way I ever had it until I took my first trip back to Germany as an adult.

In southern Germany, most potato salads are made with a vinegar, bacon, and broth base. Take a look at this one sent in by one of our readers and more of my potato salads here.

I have so many wunderbar memories in the kitchen with my Oma, and have had MANY of her most popular and traditional recipes, like this German potato salad!

I love Oma's German potato salad! I ALWAYS request this one. Especially during summertime, it's the perfect accompaniment to a fresh bratwurst from the BBQ.

Want to make sausage just like that beautifully cooked one below to pair with your potato salad? Here's the recipe for Oma's bratwurst sausage!

I remember making this salad recipe with Oma many times! It is such a hit amongst our family and is an absolute staple during our summer get-togethers.

I know what you're thinking, "But Lydia, I can just go to the store and buy one already made." Well, why would you buy it when you can make it just like Oma!

That's the best part of making your own! You can alter it to be truly yours!

My favorite part of Oma's potato salad is the pickles. They give it a nice extra crunch and punch of flavor! Pickles are also my favorite food ... so it really is a treat for me. When I make this potato salad at home, I always add quite a few pickles in there, just because. :)

Yep. Hummus. Sylvie, my daughter-in-law, shares that hummus is delicious with this quintessential German dish. Her easy hummus recipe is so quick to make and it's becoming wildly popular in Germany. Try it. I think you'll like it too!

Mutti's traditional potato salad is also what I'm usually asked to bring to parties, especially when it's a summer event. It always brings rave reviews and I've learned to have the recipe ready to give out.

If you want a still easier and quicker recipe, try the adaptation of this, my easy potato salad recipe. It's an easy recipe for a really, really good potato salad.

But first, here's the salad just like my Mutti used to make ...

Learn how to make potato salad that tastes just like it does in northern Germany. This cold German potato salad, aka Kartoffelsalat, comes from my Mutti's handwritten cookbook. I've also simplified it in this easy version.

And yes, this one is German. In fact, the mayonnaise in this, tells me it's from the northern part of Germany. Southern Germany's salads rarely have mayo. 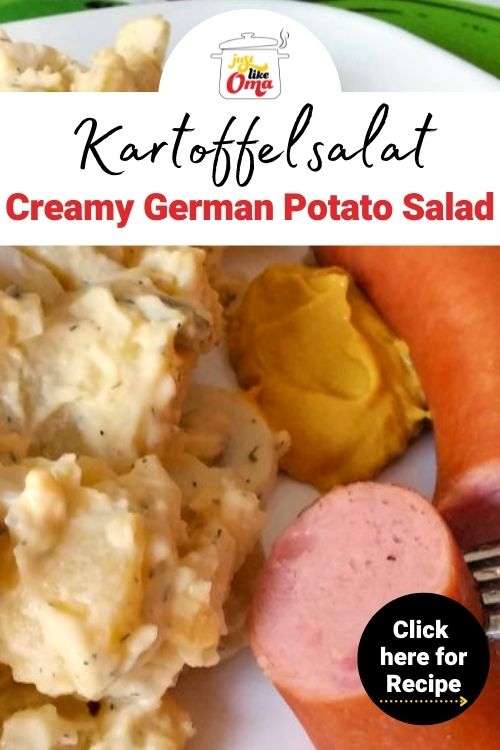 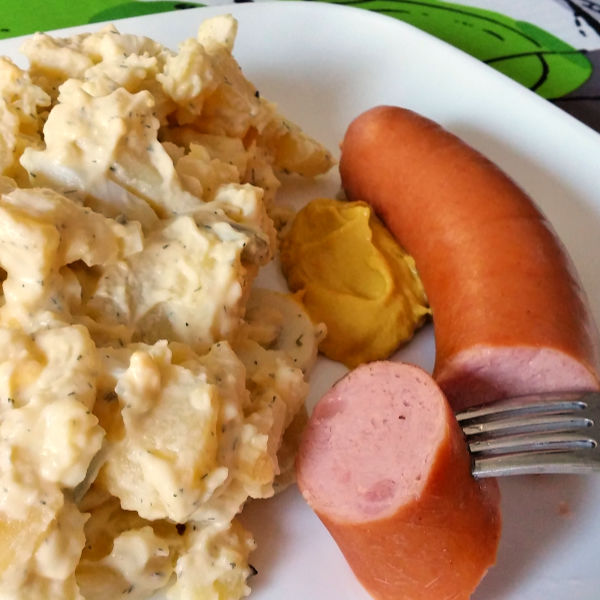 Oma's best German potato salad recipe with dill is traditional in northern Germany. Yes, it's with mayonnaise. In the South, it's without mayo. Both authentic and wunderbar!

"Worry weights a person down; an encouraging word cheers a person up."