This cream of potato soup recipe, aka Kartoffelcremesuppe,  is SO delicious! Give it a try when you want something easy but special. Topped with cheese, it's wunderbar!

This one is granddaughter inspired ... thanks, Alana!

Now, this is not a traditional German soup, but rather a soup created by an Oma for her granddaughter, but with German-loved ingredients and methods. :)

I love that Alana inspired me to make this creamy soup. The first time she tried it, her comment was, "Oma, this is my new favorite!"

If you would like another easy potato soup, but this time traditional German potato soup that's chunky-ier, check out my homemade potato soup ... just like Oma made!

We, Germans, especially from the northern part of German, LOVE our potatoes. You'll find all sorts of easy potato recipes on this website.

Germany and its Potatoes

Potatoes were brought to Germany in the 1700's but not widely accepted. In fact, it's said that Frederick the Great gave the farmers potatoes to plant.

They, in turn, threw these strange tubers to the dogs. The farmers then reasoned that because the dogs refused to touch them, they couldn't be good.

But, my, how things changed! Germany became one of the world's largest producers of potatoes. There are now so many varieties available in German stores.

Ready to make this potato soup?

This cream of potato soup recipe, aka Kartoffelcremesuppe,  is SO delicious! Give it a try when you want something easy but special. Topped with cheese, it's wunderbar!

This one is granddaughter inspired ... thanks, Alana! 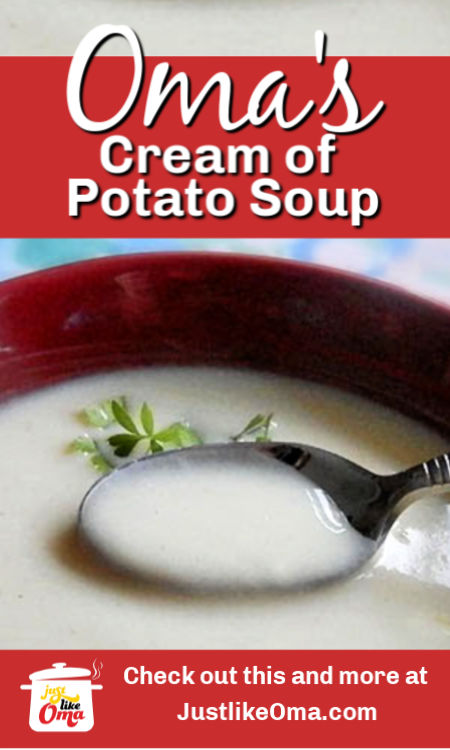 Cream of Potato Soup Recipe made Just like Oma

This cream of potato soup recipe is SO delicious! Give it a try when you want something easy but special. Top with cheese is wunderbar! This one is granddaughter inspired ... thanks, Alana!

"Truthful words stand the test of time, but lies are soon exposed"