Kitchen Scissors & how to sharpen them

Kitchen scissors seem like such an unlikely tool to have in the kitchen. Other than the usual, such as cutting paper items, opening bags of chips, and clipping coupons, what else is there?

The hints above came from my Mutti. She liked doing things in a simple way whenever possible. From her, I learned to always have several pairs of scissors in my cutlery drawer.

That way, I could grab a clean pair when the others were in the dishwasher.

These are not expensive -- 'dollar store' ones are just fine. When they get dull, it is easy just to throw them out and buy a new pair.

However, if you decided to get a good pair of scissors, you can sharpen them. Need instructions for sharpening scissors or fixing them? Here's some help from my Hubby!

Sharpening Scissors with a File 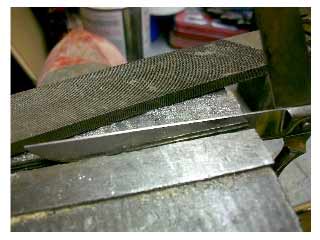 "Before the days of 'throw-away' stuff we'd use the dull scissor and cut through a small piece of #120 grit sandpaper; this one goes back to the 50's so my age is showing.

Yes it works but after a while even there I'd have to get a flat-file out in the workshop and touch up the two blades locked in a vise - don't do it free handed, the blade edge has to be uniform across its entire length.

Also make sure that during the cutting action that both blades touch each other across the entire blade length; if they don't, tighten up the center pivot screw but don't overtighten and a use little bit of olive oil from the kitchen to lubricate the blade pivot point.

When done, try cutting a piece of newspaper - VOILA!

For better quality scissors, I recommend using a flat file only. Don't use a grinder unless you have a sharpening jig; it's too easy to overheat the blades and show a tell-tale blue. When that happens, the blades will NOT maintain their sharp edges.

And lastly, stainless steel scissors are difficult to sharpen and only a new file or a grinder will restore the edges successfully.

But what happens if they're sharp and they still don't cut? Don't forget to tighten the pivot.

One of our readers J. Taylor adds:

I've always sharpened scissors the same way I sharpen a serrated knife blade. Rather than sharpening the beveled edge, uniformly sand the flat side. This is very easy using a sanding block or sheet of 220-grit sand paper laid on a piece of glass or flat 12"x12" tile.

Sand toward the sharp edge several strokes. Repeat with some 400-grit and buff. This way there is no risk of altering the angle of the bevel. After a few sharpenings it may require tightening the hinge.

Use the same method on serrated blades, that would be impossible to accurately sharpen even with files.

Check out How to Sharpen Scissors for more information, especially about fixing them.