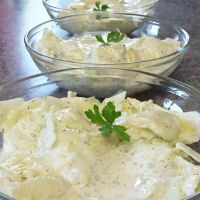 German cucumber salad recipe, aka Gurkensalad,  is one of our favorite summer salad recipes. In fact, it's one that I just can't alter.

I've tried, BUT, nothing beats this original recipe that I grew up with. It seems, that whenever I make it, I never make enough. I start out, always adding an extra cucumber to make sure there's enough.